Our client, age 47, had been arrested for DUI six years earlier in Hermosa Beach.  The facts were not pretty, as he had crashed his car into a parked car and his blood alcohol content (BAC) was 0.15%.  The client, who had just lost his job but was receiving COBRA benefits, immediately checked himself into the Betty Ford Clinic for a thirty-day alcohol treatment program.

In a Nutshell: Client finishes probation for a DUI conviction suffered at the Torrance Courthouse based on an arrest in Hermosa Beach.  Client working on contract basis, but offered full-time job if he can have the conviction expunged, so our office files the petition for dismissal (“expungement”) and the judge grants the petition, making the client eligible to become a full-time employee.

When the client left Betty Ford, he then resolved the DUI for just a three-month outpatient DUI program (the AB541 program), a $390 court fine plus penalties and assessments (total of $1,941), payment of the Hermosa Beach booking fee and restitution for the damage to the parked car. 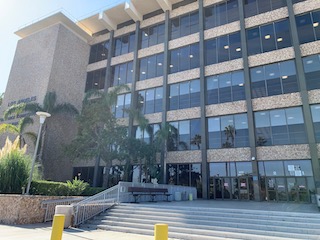 Torrance Courthouse
He paid the court fees and fines, as well as the Hermosa Beach booking fee immediately and then sailed through the AB541 program without missing a class.  Restitution turned out to be zero, as his insurance company paid for the repair expenses of the parked car he damaged.
His employment situation, however, was still suffering due to the DUI conviction.  He worked as an information technology contractor for a Fortune-500 bank in San Francisco, but only as a contract employee.  His boss on the job recognized our client’s value to the company and proposed to have him become a full-time employee, which would make him eligible for medical insurance and a retirement plan.  Our client knew, however, that he would fail the background check due to the DUI conviction.
The client called up our office, asking if expungement would erase the DUI case from his record.  Greg explained that relief under Penal Code § 1203.4 would not remove the record of the case having been filed, but it would change his last plea back to “not guilty” and show the case was dismissed, which suggests to anyone viewing it that he was never convicted.  In fact, relief under Penal Code § 1203.4 (“expungement”) allows one to legally state that he or she was never convicted of the crime, except if one is applying for a state professional license (i.e. to become a realtor, C.P.A., medical doctor, attorney, etc.), running for public office or applying to operate a lottery.
Greg further explained a judge had discretion to deny expungement for a DUI, although Greg had never seen a judge do this.  Apparently, this does take place more often in Northern California.  Under Penal Code § 1203.4(c)(1) and § 1203.4(c)(2), a judge can deny relief if one is convicted of certain offenses listed under Vehicle Code § 12810(a) to (e).  Vehicle Code § 12810(b) specifies Vehicle Code section 23152, misdemeanor DUI, and section 23153, felony DUI.
The client stated he still wished to proceed with the request for expungement, so Greg and his office prepared the CR-180 form, supplementing it with a short memorandum of points and authorities and a declaration from the client explaining why he wanted the conviction expunged.  His declaration explained how he was a contract employee, but due to this DUI conviction on his record, he was unable to transition to becoming a full-time employee, as his boss wished to hire him as.
Greg then paid the $120 filing fee in the Torrance clerk’s office, filed the petition in the courtroom served the Redondo Beach City Prosecutor and appeared at the hearing on the petition, which was about three weeks after the petition was filed.
The Torrance judge hearing the petition granted the petition, which was unopposed by the Redondo Beach City Prosecutor’s office.  Greg then advised the client of the good news, who was quite pleased to hear his record now showed the case dismissed and that he could legally state he was never convicted of DUI.
For more information about expungement and of a DUI in particular, please click on the following articles:
Contact us.
Serving Torrance, Long Beach, Compton, Airport Courthouses and Other Courthouses.