Home
Other Information
Criminal Defense Articles
Can I Have My DNA Destroyed If My Conviction Was Expunged?

Can I Have My DNA Destroyed If My Conviction Was Expunged?

If you were required to provide a DNA sample when arrested or when convicted, your DNA sample was added to the California Department of Justice DNA and Forensic Identification Database and Data Bank Program under Penal Code § 296.

In a Nutshell: This article is perhaps most applicable and attractive to someone who was forced to provide a DNA sample in Orange County.  If you later have the conviction expunged and the case dismissed, and you were averse to providing your DNA, ask a judge there to order it destroyed, as this article explains.

This database applies to both adult and juvenile offenders.  Anyone convicted of a felony or required to register as a sex offender or arson offender is required to provide such a sample.
However, if you have since had the conviction expunged (or the juvenile adjudication sealed), you may request that a judge order your DNA sample destroyed and your DNA database profile deleted under California Penal Code § 299(c)(2).
Many people have various reasons for requesting this.
To request this, one may use (it is optional) Judicial Council Form CR-185 or in the case of a juvenile, JV-796.  If one uses this form, or files a petition of one’s own drafting, it is required that the prosecuting agency assigned to the case be served by first class mail, as well as the California Department of Justice in the same manner.
The judge, in ruling on this request, will want to ensure there is no other conviction or a pending charge that qualifies the petitioner to remain included in the database, along with that person’s DNA.  Other convictions include convictions from outside California that would be felonies in California.  If one is a registered sex offender or arson offender, the judge will deny the request. 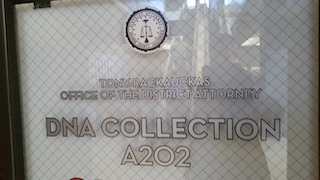 DNA Collection Office
A person can use this same form to request destruction of one’s DNA if, following the giving of a sample, no charges qualifying for inclusion in the database were filed within the applicable statute of limitations (most commonly when one is arrested for a felony, but misdemeanor charges are instead filed), or the charges that were filed were dismissed prior to a plea bargain or conviction (i.e. if one successfully completed a diversion program).
Likewise, if petitioner was found not guilty or acquitted of the qualifying offense, one may file such a request, too.
Finally, if the conviction was reversed on appeal and the case dismissed, or one was found factually innocent under Penal Code § 851.8 (or as a juvenile under Welfare & Institutions Code § 781.5), one may request destruction of one’s DNA sample and DNA database profile.
Currently, it is an unresolved issue whether one can request DNA destruction if one’s conviction was reduced from a felony to a misdemeanor under Prop 47 or Prop 64.
However, if your felony was reduced to a misdemeanor under Penal Code § 17(b) or your felony conviction was reduced to a misdemeanor or just expunged under 1203.4, you are not eligible for DNA destruction.
If the judge orders the DNA sample destroyed and petitioner’s DNA database profile deleted, that is not the end of petitioner’s work on this.  The 1) signed order must be sent to the California Department of Justice, along with; 2) the signed petition for expungement (form CR-181); 3) proof of written notice of the petition to the California Department of Justice and the prosecuting attorney; and 4) either a certified copy of the court order reversing or dismissing the conviction or case, or a letter from the prosecuting attorney certifying that no accusatory pleading was filed, the qualifying charges were dismissed before adjudication, petitioner was found factually innocent, petitioner was found not guilty, petitioner was acquitted of the underlying offense, the qualifying conviction was reversed and the case dismissed, or, in the case of a juvenile adjudication, that the qualifying sustained delinquency petition was reversed and the case dismissed.
For more information about issues, please click on the following articles:
Contact us.
Serving Torrance, Long Beach, Compton, Airport Courthouses and Other Courthouses.