Our client and her boyfriend had a history of loud arguments that disturbed the neighbors and sometimes rose to domestic violence.  Her boyfriend had even been convicted of battery upon her in two other states before the two moved to California.

Without All the Details, What Happened:  Torrance, client stabs her boyfriend’s hand with an Exacto knife, felony Penal Code § 273.5 - case dismissed.

One night, while in their trailer park in Lomita, our client and her boyfriend found themselves in another fight.  Our client was returning home from work.  Her boyfriend had been working most of the day, while drinking, at installing a new linoleum floor in their mobile home.  He was proud of his work and hoped our client would see the new floor and tell him it looked great. Our client, however, was dead tired from work.

Our client apparently said something that offended her boyfriend’s sense of accomplishment and an argument ensued.  The argument escalated to a physical fight.  In the course of the fight, the boyfriend hit our client in the face, causing a black eye, but our client slashed her boyfriend with an Exacto knife across the palm of his hand.  The Exacto knife was being used by him earlier to cut the linoleum into the correct size for the floor.  It is an extremely sharp knife.

There were no witnesses to the incident except our client and her boyfriend.

The knife’s cut caused instantaneous and profuse bleeding to her boyfriend.  Our client ran from the mobile home.  Neighbors again called the police.

When she returned about an hour later, black eye already showing, the Lomita Sheriff was waiting and arrested her.  They had seen the cut to her boyfriend and made up their decision.

Fortunately, our client did not make any admissions to the police of what she did.  The police decided to arrest her for felony domestic violence based entirely on what her boyfriend told the police.  With his deep cut to his hand, it was hard for the police not to take his story seriously.  Moreover, our client had fled the scene, which tended to suggest a recognition of fault and fear of the police.

A case of felony domestic violence (Penal Code § 273.5) was filed against our client, who did not post bail, in the Torrance Superior Court.  Our client’s defense clearly centered on self-defense, but also mutual combat.  Her boyfriend certainly had a well-documented capacity to hurt our client, not only from past instances the Lomita Sheriffs had responded to in their mobile home park, but also demonstrated by our client’s black eye.

By the time the arraignment came two days after the arrest, our client’s boyfriend had moved back to Arkansas.  We advised the District Attorney of this, but she was not going to dismiss the case without some investigation of her own.  She needed to verify his departure and unavailability.

The boyfriend refused to answer any calls from the 310-area code, thinking it was his girlfriend trying to speak to him.  In fact, some of those calls were probably her, but others were from the Torrance District Attorney’s office. 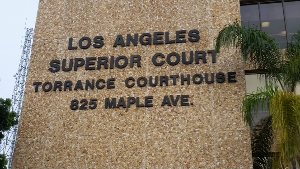 Torrance Superior Courthouse
On the second appearance, the District Attorney said she needed more time to look into the case.  We therefore set a preliminary hearing and did not waive time for a speedy trial.

After the preliminary hearing took place with the arresting officer testifying under Prop 115, our office then insisted upon a trial date at the superior court arraignment, which really made the prosecution evaluate if they could proceed without any witnesses.

The District Attorney conceded that she had no luck finding the boyfriend.  As such, she had no witnesses of our client’s alleged conduct.  The neighbors did not see any violence.  They only heard the commotion.

She then dismissed the case in the interests of justice (Penal Code § 1385), as our client certainly would not testify as a witness against herself under the Fifth Amendment.

Our client was happy that we had pressed the District Attorney and refused to enter into the plea bargains offered by the District Attorney.
For more information about delayed entry of judgment, domestic violence in general and a trial tax, click on the following articles:
Watch our Video about Domestic Violence by clicking here.
Contact us.
Serving Torrance, Long Beach, Compton, Airport Courthouses and Other Courthouses.