Our client was in a long-term relationship with a woman who worked in a mental health hospital.  She herself was diagnosed with multiple mental health problems and was under medication and seeing a psychologist.

Our client, age 27, was an apprentice plumber and under the care of a psychiatrist for several mental health problems that he had struggled with for fifteen years.  He was also prescribed various medications to help him in his daily life.  Some were extremely expensive and, consequently, he tried using other similar, but less expensive medications that were less efficacious.

Both were nice people – respectful and intelligent, earnestly trying to climb their respective professional ladders to the next level and thinking of getting married.  They shared a small apartment in Torrance.

One day, however, our client’s girlfriend decided to end the relationship.  Our client did not expect this and, in response, took out his AR-15 and walked up to her, alternatively telling her he would end her life as well as his own.  He also told her (she later told police) that if she called anyone to rescue her, he would shoot that person when they entered their apartment.

He then pushed her down on the couch and stood above her, telling her not to leave.

She pleaded with him and ultimately persuaded him to come with her to a mental health hospital.  He then calmly put away his weapon and they left for the hospital.

He was initially only charged with assault with a deadly weapon, to wit a semiautomatic rifle (Penal Code § 245(b)), a felony, and felony criminal threats (Penal Code § 422(a)).  There was an additional allegation that each offense was committed with the use of a firearm (adding ten years to the overall sentence on the primary charge, plus one-third the mid-term of four years on the other charges).

Our client first opted for the help of a public defender, but the public defender did not seem interested in listening to the extensive background information leading up to the incident.

The couple then decided to retain Greg Hill & Associates instead.  Greg listened to the extensive background information that was vital to understanding why our client responded as he did and why he was unlikely to repeat the conduct again in the future.

The district attorney’s offer was low-term of three years in state prison for the 245(b) and dismissal of the 422 charge.  The firearm allegation would also be dismissed.

Greg was optimistic (perhaps unrealistically) that a joint suspended sentence or a split sentence was an option for a resolution that would preserve our client’s plumbing career.

However, the client’s girlfriend was in constant contact with the police for weeks following the incident, even telling them that her account of the incident was false.  The police then had her give a follow-up interview wherein she contradicted herself, describing the false imprisonment, domestic violence and dissuading a witness events described above. 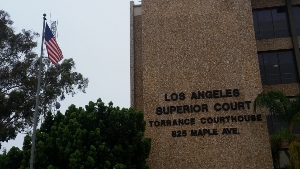 Torrance Superior Courthouse
The Torrance District Attorney specially assigned to this case shared the recorded statement with Greg.  Greg immediately had the client come into the office and listen to the twenty minute interview the police had with his girlfriend, wherein she described in detail the additional offenses, which added nine years to his initial exposure of 19 years (nine years on the 245(b), plus ten on the gun allegation).

Greg recommended that the client “lock-in” the three-year deal (before the DA could amend the complaint to add the three updated charges), which would be served at 50% because 245(b) was a serious, but not violent offense.  The client reluctantly agreed and the plea was entered about a week later.

For more information about assault with a deadly weapon issues, please click on the following articles:
Contact us.
Serving Torrance, Long Beach, Compton, Airport Courthouses and Other Courthouses.