The Right to Show Victim's Prior False Sex Assault Claims

It is often true in sex crime cases that “the person on trial is often not defendant, but the victim.”  This can have the effect of discouraging a victim from coming forward to report a crime.  Prosecutors and judges are sensitive to this reality and will attempt to keep the focus of the prosecution and the jury on defendant.

The Gist of This Article:  A U.S. federal court reversed the California Supreme Court, ruling that the domestic violence and sexual assault defendant in the case summarized herein did have a constitutional right to present evidence of the alleged victim’s prior false claims of the same allegations, as such evidence was relevant towards her credibility.

Our office has certainly seen cases where our client believes the victim is motivated by revenge, jealousy or spite, perhaps because the defendant told the victim to “go get a job” or “maybe you should lose a little weight.”  Other times, we have seen victims file sexual abuse claims and then call the defendant, offering to dismiss the charges in exchange for money (the victim usually does not have the power to do this).

Alleged victim Annette Heathon (“AH”) certainly seemed to be more in focus than Defendant Calvin Johnson in a 1999 case that resulted in multiple appeals culminating with a ruling in August, 2012. 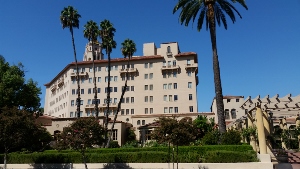 U.S. Ninth Circuit Court of Appeals Pasadena
In January, 1999, Mr. Johnson was charged with six counts related to the alleged assault, rape and robbery of his sometime girlfriend AH.  The couple had broken up, reunited, broken up, reunited and broken up many times over a ten year period.  The six counts related to one night in 1998 when he allegedly forced his way into AH’s apartment, threatened to stab her with a screw driver if she did not have sex with him, raped her and beat her.  He allegedly also tore the phone from the wall, used a knife to slash lots of her clothes in her closet and stole money from her the same evening.  Johnson claimed the sex was consensual and denied doing any of the other things AH claimed.
At trial in the San Francisco Superior Court, the judge prevented Johnson from introducing evidence for the jury to hear of AH’s multiple prior false claims against him.  Such claims alleged physical and sexual assault.  The judge also prevented Johnson from introducing evidence of AH’s past history as a prostitute, which Johnson sought to do by introducing testimony of police officers who found AH to be a prostitute and AH’s claims to be false.

Johnson was then convicted and appealed, arguing that the trial court’s ruling’s about the alleged victim’s prior false claims denied him his right to prevent a defense and to confront the witness against him.

The state supreme court denied Johnson’s appeal, concluding that the excluded evidence was neither relevant nor material to Johnson’s defense.  In a footnote, it also stated that all of Johnson’s other grounds for appeal were meritless.

After exhausting his habeas appeals in state court, Johnson filed an appeal in the United States Court of Appeals for the Ninth Circuit.  The Anti-Terrorism and Effective Death Penalty Act of 1996 (“AEDPA”) governed his petition.

The Ninth Circuit began its analysis by commenting that “a criminal defendant has a well-recognized constitutional right to present a complete defense.” Crane v. Kentucky (1986) 176 U.S. 683, 690.  It further noted that this right to a complete defense is “rooted directly in the Due Process Clause of the Fourteenth Amendment and the Confrontation Clause of the Sixth Amendment” of the U.S. Constitution.

It noted, however, that this right is not unlimited and a defendant does not have an absolute right to produce evidence, however minimal its significance or doubtful its source.  The evidence, rather, must be relevant, material and vital to the defense.

A violation of this right to produce evidence occurs when its exclusion is “arbitrary and disproportionate to the purposes it is designed to serve.” Holmes v. South Carolina (2006) 547 U.S. 319, 324.

In looking at the value of the evidence Johnson sought to introduce, but the trial judge excluded, the Ninth Circuit found the evidence was certainly relevant and material to the credibility of AH.  Therefore, the exclusion was objectively unreasonable.

The conviction was consequently reversed and the case was remanded to the trial court for a new trial.  This had to make Mr. Johnson quite happy.