In a Nutshell: To defeat a motion to quash from Facebook for subpoenaed postings, the subpoenaing party must establish good cause for the judge to order Facebook to produce the documents.  The 7-Factor Alhambra v. Superior Court test established good cause to order such production.

In San Diego Superior Court, the People accused Lance Touchstone of attempting to murder Jeffrey Renteria, his sister’s boyfriend.  Renteria and his sister had broken up and his sister had noticed that Renteria had left with three of her firearms.  One evening, while Touchstone and his sister were sitting in the house, Renteria burst into the house unannounced and Touchstone shot him.
Part of Touchstone’s defense was that Renteria had posted threatening messages on Facebook, so Touchstone had a viable self-defense claim.  He also wanted such postings to impeach the credibility of certain anticipated prosecution witnesses, including Renteria.
Mr. Touchstone therefore subpoenaed the Facebook postings, private messages and restricted postings of Renteria and Facebook moved to quash the subpoena as violating the federal Stored Communications Act (18 U.S.C. § 2701, et seq.) (SCA).  In response, Touchstone argued that the SCA was unconstitutional because it violated his federal Fifth Amendment due process rights as well as his Sixth Amendment confrontation rights.  He also offered a sealed declaration, describing and quoting certain public Facebook postings by Renteria that Touchstone argued showed Renteria’s violent nature.
The trial court ordered Facebook to comply with the subpoena, but Facebook appealed to the Fourth Appellate District, which ruled in favor of Facebook.  Touchstone then appealed to the California Supreme Court, which issued an opinion many criminal defense attorneys should applaud, but also take note of for the 7-Factor Alhambra v. Superior Court test discussed.
The California Supreme Court observed from the outset that in contrast to civil subpoenas, there is no statutory requirement of a “good cause” affidavit before a criminal subpoena may be issued.
However, to defend a subpoena against a motion to quash, the subpoenaing party must establish good cause and “some cause for discovery other than ‘a mere desire for the benefit of all information.’” Pitchess v. Superior Court (1974) 11 Cal.3d 531. 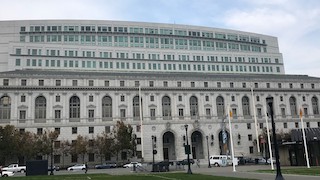 California Supreme Court San Francisco
In deciding whether good cause exists to enforce a criminal subpoena duces tecum (SDT) issued to a third party, the trial court must consider and balance the Alhambra v. Superior Court seven factors. Alhambra v. Superior Court (1998) 205 Cal.App.3d 1118, starting at p. 1134.
They are:
(1) whether the material requested is adequately described.  For example, information characterized by such broad descriptions as "all other similar crimes" or "all crimes [e.g., murders] committed during [a certain time frame] with a similar modus operandi," may be so inadequate as to make the discovery and location of such information an unreasonable burden on the governmental entity. The only practical effect of such an order may be simply to postpone the defendant's trial indefinitely. Such broad requests must be scrutinized carefully by the trial judge as part of the balancing process in which he must engage.
(2) whether the requested material is reasonably available to the governmental entity from which it is sought (and not readily available to the defendant from other sources),
(3) whether production of the records containing the requested information would violate (i) third party confidentiality or privacy rights or (ii) any protected governmental interest,
(4) whether the defendant has acted in a timely manner,
(5) whether the time required to produce the requested information will necessitate an unreasonable delay of defendant's trial.  This issue is necessarily related to the timeliness of defendant's request and must be evaluated in light of all of the facts.  However, we note that the Legislature has expressed itself on the importance of the earliest possible resolution of criminal trials, including an express condemnation of excessive continuances which was added in 1985. Penal Code § 1050, subdivision (a), provides, in pertinent part: "The welfare of the people of the State of California requires that all proceedings in criminal cases shall be set for trial and heard and determined at the earliest possible time. To this end the Legislature finds that the criminal courts are becoming increasingly congested with resulting adverse consequences to the welfare of the people and the defendant. Excessive continuances contribute substantially to this congestion and cause substantial hardship to victims and other witnesses.  Continuances also lead to longer periods of presentence confinement for those defendants in custody and the concomitant overcrowding and increased expenses of local jails.  It is therefore recognized that the people, the defendant, and the victims and other witnesses have the right to an expeditious disposition, and to that end it shall be the duty of all courts and judicial officers and of all counsel, both for the prosecution and the defense, to expedite these proceedings to the greatest degree that is consistent with the ends of justice...."
(6) whether the production of the records containing the requested information would place an unreasonable burden on the governmental entity involved; and
(7) whether the defendant has shown a sufficient plausible justification for the information sought.
The California Supreme Court, while not affirming the Fourth Appellate District, did not reverse it either.  Instead, it remanded the case back to the trial court level with instructions that it apply the seven-part Alhambra v. Superior Court test above.
We think this is good ruling insofar as the court did not agree with Facebook that the SCA barred production of the documents, which has been Facebook’s opposition to subpoenas in criminal cases for years.
The citation for the California Supreme Court ruling discussed above is Facebook, Inc. v. Superior Court of San Diego County (2020) 10 Cal. 5th 329.
For more information about discovery issues, please click on the following articles:
Contact us.
Serving Torrance, Long Beach, Compton, Airport Courthouses and Other Courthouses.