Our client, age 23, was one of more than 200 people issued a ticket for being a spectator to a speed contest along Western Avenue, just within the City of Los Angeles city limits.

He had learned about the drag races, inspired from the “Fast & Furious” movie, from a friend, who read online on Facebook or Twitter about where and when such races would take place.

In 50 Words or Less:  Client cited for violation of Los Angeles Municipal Code § 47.15, a misdemeanor, for being a spectator within 150 feet of a street race on public roadways.  Case resolved for an infraction and $500 fine.

As is often the case, the races appear in a seemingly spontaneous manner.  Hundreds of usually younger adults, mostly male, converge on an area of road, often Western Avenue (also along Canoga Avenue and Sherman Way in the Valley), to watch some drivers perform tire-burning figure eights and listen to growling engines before the real racing begins.  The males with often take pictures of each other’s cars or inspect each other’s engines.

As the figure eights start, people videotape the action and post it online.  This can be dangerous, as the drivers can lose control and plow into the crowds assembled.  The actual racing is risky, too, as the races are on public streets and often in the late night or early morning hours when it is dark.

Local residents are often quick to call the police, so as soon as the races begin, they are meant to end before police respond.  However, what we have found is that police often try to respond with a dozen or more cars, so coordinating this takes time.  Otherwise, the racers and spectators scatter, laughing at being able to get away.

In our client’s case, police responded very fast, even before our client could get out of his car, which was parked only about 50 feet from the intersection of Western Avenue.  Our client did not even see the police officers walking up behind his car, as he had his head down, texting his friend that he had arrived and telling him where he was.

Our client was handed a ticket, citing the recipient for a violation of Los Angeles Municipal Code (LAMC) § 47.15 already filled out except for his name, address and his signature on a promise to appear.  The uniformed officer knocked on our client’s window.  Our client rolled down his window, showed the officer his license and the officer hurriedly filled in the top area of the ticket, told our client to sign the bottom area and he hustled off to hand out another ticket.

Our client had no prior criminal history, but he knew enough to understand that being charged with a misdemeanor involved possible jail time and significant fines.  He also called the courthouse, the Metropolitan Courthouse at 1845 South Hill Street, which explained that he could not just pay a ticket online or over the phone to resolve the ticket. 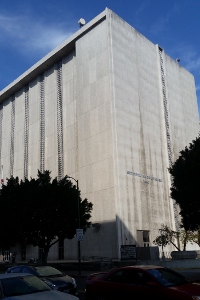 Metropolitan Superior Courthouse in Los Angeles
He called up Greg Hill & Associates and spoke to Greg, who explained the requirements of LAMC 47.15 and the penalties.  Two of the biggest requirements to prove such a violation are that the person cited must be in the area for the purpose of being a spectator at a street race on public roadways.

The second one is that the person cited must be located within 150 feet of the area to be used for such a race.  In our case, both of these requirements were met, although we noted that in handing out so many tickets, it would have been impossible for the police officer to remember each person handed a ticket and their exact location.

Greg also discussed the penalties that our client faced for such a misdemeanor, which was up to three years of summary probation, up to a $1,000 fine (plus penalties and assessments) and up to six months in county jail.

Greg then appeared at the arraignment on the client’s behalf and pled not guilty to the complaint.  There was no initial offer at all.  He set the matter for a pre-trial hearing about a month later and appeared again, this time getting an offer of two years’ summary probation and a $500 fine.  This was somewhat ridiculous, given our client’s otherwise spotless record.

At the second pre-trial hearing, Greg was able to negotiate with a prosecutor much more willing to resolve the case on its merits.  The prosecutor agreed to amend the complaint to allege the violation as an infraction (this meant no probation) and a $500 fine.

Our client agreed to accept this offer, relieved at avoiding a misdemeanor and being on probation.