The following summary of a recent Ninth Circuit court case from Washington State exemplifies the high standard that officers must meet to establish a reasonable suspicion to stop and frisk under Terry v. Ohio (1968) 392 U.S.  The Ninth Circuit’s ruling also recognized the observations of Justice John Paul Stevens from almost twenty years ago that:

Brief Synopsis: Police do not have reasonable suspicion of criminal activity sufficient to stop and frisk someone for officer safety solely based on an anonymous 911 call that there is a man with a gun, without any report of the man being involved in a crime.  This is true even if the man attempts to flee police, as the following ruling from the Ninth Circuit describes.

Among some citizens, particularly minorities and those residing in high crime areas, there is also the possibility that the freeing person in entirely innocent, but, with or without justification, believes that contact with police can itself be dangerous, apart from any criminal activity associated with the officer’s sudden presence.

The underlying facts of the case were that on January 11, 2016, an unidentified resident at a YWCA in the Belltown neighborhood of Seattle called 911 to report “someone with a gun.”  The caller never saw the gun, but someone told her that a young, black man with dreadlocks, a camouflage jacket and red shoes had a gun.

The caller did not report that the young black man was loitering, harassing or threatening anyone or doing anything other than be seen by the resident.  It was about 7:00 p.m. and dark out.

While the Seattle Police were speaking with the caller, two King County Metro Transit Unit (“Metro”) officers heard and responded to the 911 call.

One of the Metro officers immediately spotted the young black man fitting the caller’s description, Daniel Derek Brown.  The officers drove behind Brown, who was on foot, for several blocks before turning on his patrol lights to drive the wrong way down a one-way street to follow Brown.

When Brown saw the lights and patrol car behind him, he began to run.  The Metro officers then pursued Brown and stopped him one block later.  They then ordered him to the ground at gun point. 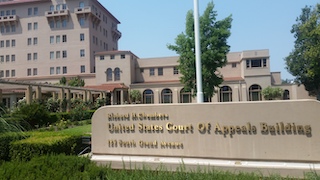 U.S. Ninth Circuit Court of Appeals Pasadena
The officer then placed Brown in handcuffs and found the reported firearm in his waistband.  A further search found drugs, cash and other items.

Brown then moved to suppress the evidence from the searches, arguing that the officers lacked reasonable suspicion to stop and frisk him under Terry v. Ohio, supra.

The Ninth Circuit distilled down the issue quickly to the legal right of an officer to “conduct a brief, investigatory stop when the officer has a reasonable, articulable suspicion that criminal activity is afoot.”  Wardlow, supra, at 123.

In reviewing the totality of the circumstances surrounding the stop of Mr. Brown, including “both the content of information possessed by police and its degree of reliability.”  United States v. Williams (9th Cir., 2016) 846 F. 3d 303, 308, quoting Alabama v. White (1990) 496 U.S. 325, 330, the court reviewed it “de novo,” or again entirely from the start like the district court would have, rather than applying an abuse of discretion standard.

Here, the appellate court noted that there is no Washington law that prohibits a black man from carrying a concealed firearm.  As is especially true in the racially charged times at present, the Ninth Circuit noted, one must resist rushing to conclusions and hesitate to consider flight enough to justify the stop, particularly without any police attempt to talk to Mr. Brown first.

In looking at the totality of the circumstances, the Ninth Circuit found a few things dispositive for finding probable cause to stop Brown.  First, the tip was not from a reliable source.  The 911 caller only told police what another YWCA patron told her and made it clear that the YWCA patron refused to be identified.  Second, there was no reasonable inference of criminal behavior.  Third, the YWCA was not in a particularly high crime area.  At most, the officers had an unsupported hunch of wrongdoing.  Therefore, the evidence obtained was ordered suppressed.

We like this ruling because of its potential use for cases here in our area, including in the context of DUI, wherein we find officers frequently make traffic stops based on hunches, given the time in the early morning that a driver is observed driving on our roads.  Often, the alleged criminal activity is only discovered after the stop, i.e. expired registration or a suspended license, which we often argue means the traffic stop was improper and the evidence of the driver’s blood alcohol content (BAC) should be suppressed.
The citation for the U.S. Ninth Circuit Court of Appeals ruling discussed above is United States v. Daniel Derek Brown (9th Cir., 2019) 925 F.3d 1150.
For more information about stop and frisk issues, please click on the following articles:
Contact us.
Serving Torrance, Long Beach, Compton, Airport Courthouses and Other Courthouses.