Home
Other Information
Criminal Defense Articles
Is a Smell of Pot Enough to Search Someone for Weapons?

Is a Smell of Pot Enough to Search Someone for Weapons?

Most experienced defense attorneys are familiar with losing a motion to suppress after hearing a judge explain that in viewing “the totality of the circumstances,” an officer’s conduct was reasonable and therefore, a search was legal.

Most attorneys will comment that in viewing the police report, there were certain things stated, which is why the motion was filed, but once the arresting officer testifies in court, additional “facts” are testified to.  These additional facts, not stated in the police report, then give the judge things to consider in evaluating the totality of the circumstances.  A defense attorney often feels sand bagged and outraged that the police report did not mention such obviously important facts, but the officer conveniently remembers such facts once the legality of his search is challenged.  It makes one wonder is such additional facts really ever existed.

About This Article Briefly: Post passage of Prop 46, the Adult Use of Marijuana Act, the smell of marijuana alone should not be enough for police to search someone for weapons.  In the following pre-Prop 46 case, the First Appellate District Court seemed to agree that the totality of the circumstances and not just a smell would be needed to allow a stop and frisk of someone under Terry v. Ohio.

The case of In re D.D. (2015 DJDAR 2074) epitomized this situation.  San Francisco police officers were patrolling an area where there had been many armed robberies lately.  It was an area within two blocks of the Glen Park and Balboa Park BART stations.  The robberies were committed by mostly young males (teenage or in their early 20’s”) wearing loose-fitting, dark-colored hooded sweatshirts.

At about 4:00 p.m., the officers were patrolling the area in an unmarked vehicle and saw two teenaged males wearing hooded sweatshirts and standing in the San Francisco Municipal Railway employee only parking lot.  Since the two teenagers did not appear to be dressed like city employees and there were signs prohibiting trespassing, the officers pulled over.  One of the officers allegedly, observed smoke near the two teenagers. 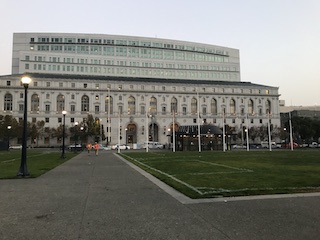 Court of Appeal First Appellate District San Francisco
When the officers came near the juvenile, they could allegedly smell marijuana.  At the preliminary hearing, the officer stated that one of the boys, D.D., looked directly at the officers and turned away “suspiciously.”
One of the officers asked the boys, “who’s got weed?”  D.D.’s friend K.D. responded, admitting he had some marijuana.  D.D. then entered into a car and sat in it.

One of the officers asked D.D. to get out of the car, which D.D. did.  The officer asked D.D. for his name and D.D. provided a name that dispatch revealed was false I.D.  The officer received this information about D.D. while he was talking to D.D., who the officer described as appearing “apprehensive and nervous.”  D.D. also “kept looking left and right up and down the street without making eye contact” with the police officer.

But what made the officer most suspicious was how D.D. kept repositioning himself so his right hip was away from the officer.  According to the policer officer, “D.D. stood in a bladed stance, with one foot forward and one foot in the back about at a 45 degree angle.”  Based on this behavior, the officer testified that he formed the opinion that D.D. was carrying a gun, most likely by his right hip under his sweatshirt.

The officer then decided to search D.D. out of concern for his safety.  The search found a black, semiautomatic handgun.  It was a Glock nine millimeter and it was loaded with a live round in the chamber.

D.D. was then arrested and later charged in juvenile court (D.D. was fifteen years old) with possession of a concealed loaded handgun, a violation of Penal Code § 25400(a)(2).

D.D. then filed a motion to suppress the evidence.  The Alameda Superior Court judge hearing the motion denied it and D.D. appealed to the First Appellate District.

The appellate court began its analysis with reference to Terry v. Ohio (1968) 392 U.S. 1 at 19, fn 16, which held that the Fourth Amendment prohibits seizures of persons, including brief investigative stops, when they are unreasonable.  A detention is reasonable when the detaining officers “can point to specific articulable facts that, considered in light of the totality of the circumstances, provide some objective manifestation that the person detained may be involved in criminal activity.” People v. Sauza (1994) 9 Cal. 4th 224, 229-231.

People v. Avila (1997) 58 Cal. App. 4th -1069, at 1074 then controls the analysis as to whether an officer can search an individual for weapons.  It said that the officer “need not be absolutely certain that the individual is armed; the crux of the issue is whether a reasonably prudent person in the same situation, under the totality of the circumstances would believe that his or her safety was in danger.”  In evaluating the totality of the circumstances here, which was much more than just the smell of marijuana stated on the police report, the appellate court affirmed the ruling on the motion to suppress.