There are certain rights that the U.S. Constitution sets out that are considered incorporated guarantees applicable to each of the fifty states through the Fourteenth Amendment’s Due Process provisions.  Included in such due process rights are the freedom of speech, the right against excessive bail and the freedom of religion.  In other words, neither the federal government nor the state government can make laws that prohibit such basic rights – they are incorporated as against the states, too, although the U.S. Constitution only sets limits on the federal government.

Summary in 55 Words or Less: The U.S. Supreme Court held that the State of Indiana acted incorrectly in fines of $1,203 and ordering the surrender / forfeiture of a $42,000 Range Rover SUV as a fine when defendant was found in possession of heroin for sales in the SUV and the maximum fine otherwise for the crime was $10,000.

This general principal of certain fundamental rights being incorporated against states was recently put to the test by the State of Indiana.  In Indiana, Tyson Timbs pleaded guilty in Indiana state court to sales of a controlled substance and conspiracy to commit theft.  He was sentenced to one year of house arrest, ordered to pay a fine of $1,203 and placed on five years of probation, which included a court-supervised drug addiction program.
At the time of his arrest, police seized Timbs’ Land Rover SUV that Timbs had recently purchased for $42,000 with insurance proceeds from an insurance policy when his father passed away.  The Land Rover, police alleged, had been used to transport heroin, so they seized it and kept it.
Indiana sought forfeiture of the Land Rover based on the vehicle’s being used to commit the crime of sales and Timbs fought this, arguing at the trial court level that were the state to seize the car, Indiana would be violating the Eighth Amendment prohibition against excessive fines because the Indiana law for sales of a controlled substance set out a maximum fine of $10,000.  To seize the car would constitute a fine of four times the state limit on such a fine.  Timbs argued that the Eighth Amendment of the U.S. Constitution was applicable to each of the states through the Fourteenth Amendment. 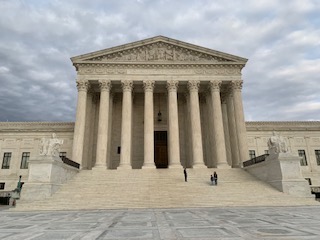 U.S. Supreme Court
The trial court judge in Indiana agreed with Timbs and denied the People’s request to order the car forfeited.
Indiana then appealed to the appellate court, which affirmed the trial court judge.
Indiana was not done, so it appealed to the Indiana Supreme Court, which ruled in Indiana’s favor, holding that the state could seize the Land Rover because the excessive fines clause of Eighth Amendment was only applicable against the federal government.
Timbs then appealed to the U.S. Supreme Court, which reversed the Indiana Supreme Court in Tyson Timbs v. Indiana (2019 DJDAR 1338).  Justice Ginsburg wrote the majority opinion for the court, authoring a scholarly opinion that first traced how the Bill of Rights (the first ten amendments, which includes the right against excessive fines) was originally held to only apply to the federal government.
Over the years, however, in a series of many court opinions, mostly after the Civil War, such fundamental rights were all made applicable to the states, but with just a few exceptions.  McDonald v. Chicago (2010) 561 U.S. 742, 767.  Such rights are considered incorporated rights because they are “fundamental to our scheme of ordered liberty” or “deeply rooted in this Nation’s history and tradition.”  McDonald at 767.  They are guarantees enforced against the states under the Fourteenth Amendment.
Under the Eighth Amendment, “excessive bail shall not be required, nor excessive fines imposed, nor cruel and unusual punishment inflicted.”  Ginsburg wrote, “taken together, these clauses place “parallel limitations” on the power of these “entrusted with the criminal-law function of government.”  Browning-Ferris Industries of Vt., Inc. v. Kelco Disposal Inc. (1989) 492 U.S. 257, 263.  Directly at issue here is the phase “nor excessive fines imposed” which “limits the government’s power to extract payments, whether in cash or in kind, ‘as punishment for some offense.’” United States v. Bajakajian (1998) 524 U.S. 317, 327-328.
The Supreme Court then directly ruled that the Fourteenth Amendment incorporates this provision.  Justice Ginsburg then traced back the history of prohibitions against excessive fines, starting with the Magna Carta in 1215, then explaining how this principal was carried into seventeenth century English law, then into pre-Constitution laws in the colonies, then into the U.S. Constitution.  It is an enjoyable history to review.
Turning then to Timbs’ case and the Indiana Supreme Court ruling, Ginsburg found the seizure of a car valued at $42,000 to clearly be an excessive fine not passing constitutional standards and ordered the Indiana Supreme Court reverse its ruling, returning the car to Timbs.
The citation for the U.S. Supreme Court ruling discussed above is Tyson Timbs v. Indiana (2019) ___ U.S. ___, 139 S. Ct. 682, 203 L. Ed. 2d. 11.
For more information about fines and fees, please click on the following articles:
Contact us.