Our client, age 18 and a recent high school graduate, and her friend, age 19, went to the Redondo Beach Galleria with empty shopping bags.  They were both pregnant and neither were still on speaking terms with the fathers.  Neither were married and neither were continuing their education by going to any school.
Loss prevention observed the two young women enter Kohl’s the store and noted how they both were carrying empty shopping bags.  It looked suspicious.  It was about 7:30 p.m. on a Saturday evening when the store was not too busy, so loss prevention had an easy time watching the two walk around the store.
Our client’s friend boasted to our client that she was very good at shoplifting and that she would teach our client how to shoplift.  Our client did not think this was a good idea, but she did not refuse to cooperate.  She knew it was wrong, but she continued walking throughout the store with her friend.
The friend picked some adidas shoes from a display and placed them in her bag.  Our client did the same with some white tennis shoes, some adidas shoes and some Nike sandals.  The two went into the infant department and began taking items off their hangars and placing them in their bags. 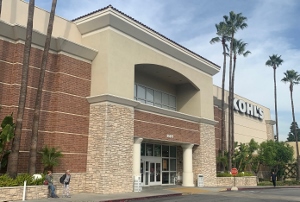 Loss prevention then called the Redondo Beach Police Department while the client and her friend were still in the store.  Loss prevention could tell the two had no intention of paying for the merchandise by the mannerisms and way the two young women were walking around the store.
The two then went into the toy department and while in there, they each stuffed some of the infant clothing into their purses.
The two then proceeded to the home department where the two then took out the shoes from the boxes and stuff the shoes in their purses, too, leaving the shoe boxes back in the home department.  They also left the empty shopping bags back in the home department.
The two then attempted to walk out of the store just holding their purses.  Loss prevention was waiting for the two to exit the same way they entered.  As loss prevention attempted to stop our client and her friend, the two kept walking, refusing to stop and yelling at loss prevention “get away from me!  Stop hassling me!”
At this point, the Redondo Beach Police Department stepped in and physically stopped our client and her friend.  They had walked for several minutes outside the store and away.  The police seized the client’s purse, as well as that of her friend.  Another officer grabbed the arm of each girl.  Each girl immediately yelled that the officer was hurting her and that they would sue the police.
Police then escorted the girls to the loss prevention office where the contents of each girl’s purse were inventoried.  Our client had $184.99 in value of items taken.  She had taken seven items.  Her friend had taken eleven items worth $288.  Police also found a seven-inch knife in the purse of the client’s friend.
Police then took both girls to the Redondo Beach Police Department, where they were booked and held for a few hours.  Our client eventually called her parents, who picked her up at the police station with no bail.
The parents immediately called Greg Hill & Associates.  Due to their daughter’s young age, they took the lead in explaining to Greg what had happened and asking what could be done.  Greg recommended that their daughter enroll in and take an online shoplifting prevention course, which the client did after several reminders from Greg.  To Greg, this was important to do as a way of starting the plea negotiations in the direction of leniency in punishment and toward treating the client as almost a juvenile with rehabilitation in mind, rather than punishment.
The first offer from the Redondo Beach City Prosecutor for our client was a plea to a violation of Penal Code section 484(a) (“petty theft”) with thirty-six months of summary, or informal probation, a $300 fine plus penalties and assessments (total of about $1,050), a stay-away order from the South Bay Galleria and all Kohl’s, and payment of the Redondo Beach police department booking fee of $245.
Over the next few months, Greg continued negotiating on the plea bargain, attempting to have the prosecutor offer diversion for our client.  The prosecutor refused because the girls were both uncooperative with loss prevention and because they had seemed to plan out their shoplifting in advance, even entering the store with empty shopping bags and the one girl carried a long knife.
The prosecutor did reduce the offer for our client to two years of informal probation and a $100 fine, plus penalties and assessments, with the same booking fee and stay away offer.  Our client was not happy with the offer, but accepted it, aware that if she went to trial, the video footage of her shoplifting would lead to a conviction and far greater punishment from the judge.
For more information about shoplifting, please click on the following articles:
Contact us.