In resolving a sex offense case, defendant may agree to attend twenty-six or fifty-two meetings of one of several organizations formed to help those control inappropriate sexual urges.

Brief Synopsis:  Sexual Compulsiveness Anonymous (SCA) is generally for homosexual men and charges a fee, usually about $30, per meeting.  It is not group therapy, so it avoids making someone self-conscious or embarrassed about attendance.  Sexaholics Anonymous (SAA) is generally free and is for both men and women.  It has e-mail and VOIP meetings available.

The defendant may have been charged with indecent exposure (Penal Code § 314), solicitation of prostitution of a minor (Penal Code § 647(b)(3)), lewd conduct in public (Penal Code § 647(a)), lewd conduct with a minor (Penal Code § 288), arranging a meeting with a child for lewd purposes (Penal Code § 288.4), contacting a minor to commit a felony (Penal Code § 288.3), annoying or molesting a child under 18 (Penal Code § 647.6) or possession of child pornography (Penal Code § 311), among other offenses.
The two most common, and most easily attended programs are Sexual Compulsives Anonymous (SCA) and Sexaholics Anonymous (SAA).  While both programs follow a 12-step approach toward overcoming acting out on inappropriate sexual urges, there are significant differences in the two programs.
In many areas, but not in all, SCA classes cater to homosexual tendencies of men, especially within Los Angeles County.  SCA describes its mission as keeping its members “sexually sober” and to prevent or minimize sexually compulsive behavior.  The classes are designed to educate attendees on how to better manage themselves in an anonymous atmosphere.  Their website explains: “We are not here to repress our God-given sexuality, but to learn how to express it in ways that will not make unreasonable demands on our time and energy, place us in legal jeopardy — or endanger our mental, physical or spiritual health.” 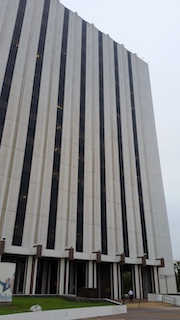 Compton Courthouse
Its website states that it is not group therapy, as many might assume, but a spiritual program to overcome sexual addictions and reach sexual sobriety.  It is similar to AA in its approach.  Since it is not group therapy, it avoids concerns by attendees that they will be embarrassed or at least self-conscious in a group setting.
SCA has meetings in Hollywood, Silverlake, Long Beach, the Fairfax district, Van Nuys, Culver City, Pasadena, Santa Ana, Palm Springs and in Downtown Los Angeles on a bi-weekly or weekly basis.  One can Google Sexual Compulsiveness Anonymous to see the most current schedule and meeting locations.
Sexaholics Anonymous (SAA), on the other hand, states its mission is to help its member stop lusting and lead a life of sexual sobriety.  Like SCA, SAA requires no dues and describes itself as a fellowship of “men and women.”  SAA is generally thought of as more for both men and women who have heterosexual urge management issues.
As its name implies, SAA is a recovery program based on Alcoholics Anonymous (AA) and its meetings are similarly free.  This can be more appealing that SCA, which often requests a fee for each meeting ($30 or more).  Like AA, SAA employs a 12-step approach to recovery and teaches the Twelve Traditions, which has a distinctly Christian basis.
SAA offers face-to-face, personal meetings, as well as “email meetings” and “telephonic / VOIP meetings.”  As the reader of this article may be keenly interested in e-mail meetings or telephonic meetings, we caution that this form of attending SA should be approved by the judge handling one’s case before attending such meetings to satisfy the requirements of a plea bargain.  Most judges favor or even require the face-to-face meetings, as such meetings are more effective, they believe, than e-mail or telephonic meetings because they demand more of one’s attention and thus are believed to be more effective.
We present this article to the reader so that one can answer questions of a judge or prosecutor about such program in proposing resolution of a sex offense case with probation terms or diversion terms that include attendance at SCA or SAA meetings.  The more one knows about such classes, the more persuasive one can be in proposing such classes as part of a resolution.