Penal Code § 667(a) requires a trial court to impose a five-year sentence enhancement for each prior serious felony conviction.
This legislation was codified largely in response to People v. Fritz (1385) 40 Cal.3d 227, 230-231, wherein our Supreme Court held that absent express language to the contrary, courts retained statutory authority under Penal Code § 1985 to strike a prior felony conviction “in furtherance of justice.”

In response the Legislature enacted as urgency legislation former subdivision (b) of 1385 “expressly for the purpose of abrogating People v. Fritz.”  People v. Fuentes (2016) 1 Cal.5th 218, 231.  The Career Criminal Punishment Act took effect on March 6, 1986, specifying that courts lacked the power “to strike any prior conviction of a serious felony for purposes of enhancement of a sentence under 667.”
The situation changed on January 1, 2019 when Senate Bill 1393 took effect.  This legislation amended § 1385, subdivision (b)(1), to give courts power to strike the five-year prior serious felony enhancement in the “interest of justice.”  By making this change, the Legislature sought to reinstate the rule previously articulated in Fritz, supra.  People v. Stamps (2020) 9 Cal.5th 685, 702 interpreted 1393 as “intending to bring a court’s discretion to strike a five-year serious felony enhancement in line with the court’s general discretion to strike other enhancements.”
It is against this general background that the case of People v. Shaun Reginald Shaw was heard in San Diego County Superior Court.  The basic facts were that Shaw was storing vehicles on William C.’s property without his permission and William C. had one of the vehicles towed.  Enraged, Shaw broke into William’s home, swinging a hatchet and demanding “his mother fucking cars” and threatening to “kill his ass.”  Shaw cut William’s lip with the hatchet and pursued William through the house, punching him and verbally threatening his life. 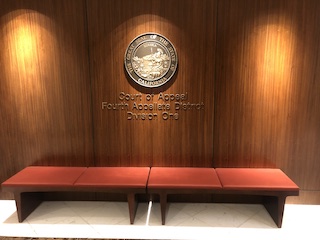 Court of Appeal Fourth Appellate District Div 1 San Diego
A jury convicted him of burglary, assault with a deadly weapon and making a criminal threat.  He had a prior serious felony conviction and the trial court judge imposed the five-year serious prior felony enhancement, adding five years to his sentence under Penal Code § 667(a).  His total sentence was 21 years and four months in state prison.  This sentence also included four one-year enhancements for having four prior prison sentences (under AB 136, the imposition of such prior enhancements under Penal Code § 667.5(b) is illegal now).  Shaw’s prior serious felony was 25 years old.
Mr. Shaw filed a petition for resentencing under Senate Bill 1393 and the judge, Frederick L. Link, again imposed the five-year serious felony enhancement.
Shaw then appealed to the Fourth Appellate District Court for review because he believed Judge Link abused his discretion in not striking the five-year prior serious felony conviction.
The Fourth Appellate District affirmed Judge Link, who had considered a long list of prior convictions since 1987, which he characterized as a “one-man crime wave.”  The Fourth Appellate District reviewed the record from the resentencing hearing and found that Judge Link had considered the relevant factors and reasonably concluded that it would not be ‘in furtherance of justice” to strike the five-year enhancement.
The trial judge stated that he stood by the reasons he had articulated at the original sentencing hearing.  At that prior hearing, he remarked that this was a “serious case.”  Although the victim managed to escape with just a cut on his lip, Shaw still “busted into somebody’s home with an axe in hand” and attacked him a hatchet.”  That the judge found no factors in mitigation at the original sentencing hearing further supports his ruling.
Judge Link allowed, “while Shaw seemed to be a nice guy,” he clearly had a problem.  Since 1987, he had been convicted of firearm possession, assault with a deadly weapon, theft and possessing, selling, and transporting controlled substances.  Taken together with this case, Judge Link described Shaw as a “one-man crime wave.”  There were frequent convictions.
However, the Fourth Appellate District did remand the case to the trial court with instructions that it strike four years of the sentence, one year for each prior prison term as provided in the new AB 136 amending Penal Code § 667.5(b).
We bring this case summary to the reader’s attention to show that even when the prior serious felony conviction is 25 years old, it may not be stricken and this would not be an abuse of discretion if defendant had multiple convictions since then.
The citation for the Fourth Appellate District Court ruling discussed above is People v. Shaun Reginald Shaw (4th App. Dist., 2020) 56 Cal. App. 5th 582, 270 Cal. Rptr. 3d 554.
For more information about SB 1393, please click on the following articles:
Contact us.
Serving Torrance, Long Beach, Compton, Airport Courthouses and Other Courthouses.