Our client, age 40, was talking about women with his friend.  His friend then gave him the phone number of a woman he believed our client could call to possibly have sex with for a fee.
Our client’s friend gave him the phone number for a police officer.  Our client certainly did not know this and called the woman, quickly agreeing to meet with her, pay her $100 and to have thirty minutes of sex with her at the Ambassador Motel in South-Central Los Angeles.
The woman then notified her colleagues that she had been solicited to have sex with someone and that she would need help in arresting our client.
Further text messages were exchanged by our client and the cop, with the cop telling our client to meet her by the swimming pool at the hotel.
The problem with this, the client learned upon arrival at the hotel, is that the Ambassador Hotel did not have a pool.  At this point, our client suspected something was wrong. 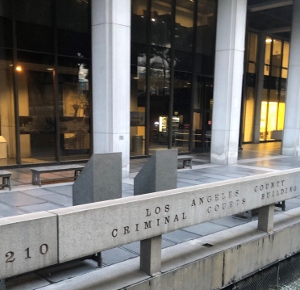 His suspicions were confirmed rather quickly when two male police officers approached him and asked him if he was there to meet with “Lola.”  Our client admitted he was and the officers promptly arrested him.
Our client had been convicted before for solicitation of prostitution (Penal Code § 647(b)), so he was aware that upon a second conviction, he faced mandatory jail time of at least 45 days in county jail.  The Los Angeles Police Department police officers taking him to the 77th Street Precinct jail for booking reminded him of this (it was unusual for officers to arrest a person for solicitation of prostitution – usually just a ticket is issued with client signing a promise to appear in court at a later date).
Consequently, when our client was released from jail after being assigned a court date about six weeks later at the Clara Shortridge Foltz courthouse at 210 West Temple Street, he called Greg Hill & Associates.
He knew he needed an attorney, as he was fearful of going to jail for 45 days or more.  The client explained what had happened and how stupid he felt he was.  He was full of questions about ways to avoid the 45 days of jail.  As a new U.S. citizen, but born overseas, he was anxious about U.S. jails and feared being beaten up inside the jail.
Greg explained that in his experience, the judge would sentence the client to the 45 days in county jail, as the statute so requires this.  However, since our client’s prior conviction was almost ten years earlier, our expectation is that the judge would impose the minimum jail required, not more than 45 days.
Greg further explained that he would attempt to have the 45 days suspended and not imposed while the client agreed to perform some community service in lieu of serving the time immediately.  Greg also advised the client that he would have to attend a prostitution diversion program (PDP) that took various forms in Los Angeles County.
Greg and the client then further discussed house arrest, private jail, a SCRAM monitor and converting all the county jail to community service.  The client also asked about paying an enormous fee to the court to avoid going to jail, but Greg explained that this most likely would be rejected as an offer.
Greg then explained some of his prior cases with second-time prostitution charges and how he was able to have the client avoid the jail term.  This made the client feel better, but he was still extremely nervous.
Greg Hill & Associates then sent out initial letters to the Los Angeles Police Department and the Los Angeles City Attorney’s Office requesting a copy of the police report and all related documents.  No response was received before the arraignment date.
Greg then went to the Clara Shortridge Foltz criminal courts building for the client’s arraignment and was pleasantly surprised to be notified by the clerk’s office that the case was not filed.  This was a tremendous relief to the client, who offered to pay Greg a bonus for his help, but Greg declined.
For more information about prostitution cases, please click on the following articles:
Contact us.
Serving Torrance, Long Beach, Compton, Airport Courthouses and Other Courthouses.