In 2010, when our client was 30, he decided to come out to Hermosa Beach, California from New Hampshire to visit one of his old friends.  Our client had joined the Marines late in life and had received orders to deploy to Afghanistan.  His old friend invited him out for a farewell.
The farewell left our client with a criminal history for an arrest.
He and his friend had gone down to Pier Plaza and coincidentally found a bar playing our client’s favorite team, the Boston Red Sox, in a game with some other team.  Our client felt nothing could be better than having a beer, watching the Red Sox and being with his old friend in warm Southern California.
Our client’s friend invited a few of his other friends to the bar and, when told that our client was about to deploy to Afghanistan, each decided to buy him a drink out of respect.  His low-key night out turned into a hero’s send-off and our client drank over ten alcoholic drinks. 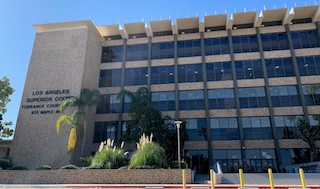 Torrance Courthouse
As so often happens over alcohol, somehow our client lost contact with his friends later that night.  He tried calling his friend, but his friend was not answering his calls.  Our client then decided to sit on a bench on Pier Plaza to wait to try calling his friend later.
A Hermosa Beach Police Officer patrolling Pier Plaza then observed our client and could tell he was exceedingly drunk.  He asked if our friend needed any help and our client apparently demonstrated to the police officer that he was unable to care for his own well being and safety, a violation of California Penal Code § 647(f) (“Public Intoxication”).
The officer then arrested our client for public intoxication and took him to the Hermosa Beach City Jail, where our client was booked and then placed in a holding cell.
Several hours later, apparently after demonstrating he was sufficiently sobered up, the police released him under Penal Code § 849(b)(2), which is a provision that permits police to release a person after an arrest for public intoxication when no further action is deemed necessary.  Our client’s status as a Marine about to deploy to Afghanistan, which our client explained to the police, certainly may have been a factor in deciding to release our client under 849(b)(2).
Our client then found his friend again, deployed to Afghanistan and even was awarded a Purple Heart after suffering an injury there from enemy fire.
He then returned to the United States and went back to college, earning a bachelor’s degree in chemical engineering and then leaving the Marine Corps to work for FEMA.
Life was not easy, however, as he did not like working for FEMA and wanted to rejoin the Marines.  No branch of the military would allow him to re-enlist because his criminal history showed an arrest for public intoxication in Hermosa Beach.  To the military, this signaled a weakness for alcohol or substance abuse and therefore, he was a liability.  In the context of entrusting him with classified or secret information, this record for public intoxication (even though he was never charged with it, let alone convicted of this), made him vulnerable to black mail.
In 2019, when the client was now 39, he contacted another former Marine, Greg Hill, and discussed sealing his record of the arrest.  Greg listened to the client explain what had taken place and why he wanted his arrest record sealed.  The client felt comfortable retaining Greg Hill & Associates because Greg had served in combat like him and Greg was a commissioned officer.  Greg had 35 combat missions in Operation Desert Storm in 1991, while flying the EA-6B Prowler, a tactical jet using electronic warfare to neutralize enemy radar capabilities.
Greg explained how sealing the client’s arrest record from Hermosa Beach was possible under Penal Code §§ 851.91 and 851.92, as part of the new (2017) CARE Act signed into law by then-governor Jerry Brown.
Greg Hill & Associates then prepared the CR-409 judicial council form required for such a seal and destroy request, supplementing it with a short points and authorities as well as a declaration from our client explaining why he sought the sealing and destruction of his 2010 arrest record.
Our office then filed this with the Torrance Court and served both the Hermosa Beach Police Department and the Redondo Beach City Prosecutor’s Office, which handles matters for Hermosa Beach such as this type of petition.
A hearing date was then set, at which time the Torrance judge assigned to the matter granted the request and signed the order directing the California Department of Justice to update the client’s criminal history record (in the NCIC database) to carry out the judge’s order.
The client was very happy with this outcome and optimistic that he could return to serving our county overseas again.
For more information about sealing and destroying an arrest record and court file, please click on the following articles:
Contact us.
Serving Torrance, Long Beach, Compton, Airport Courthouses and Other Courthouses.