Our office receives at least three calls per week, sometimes three per day, about Senate Bill 620 and how one “can get the gun enhancement taken off,” or removed from one’s sentence.  As is not uncommon, a sentence may be thirteen years, of which ten years is just for the gun enhancement, so removing ten years is not insignificant.
In almost every case, we ask if the judgment in the case is final and the caller usually does not know.  We then ask when the defendant was sentenced and if there is any appeal still pending in any court.  Very often, there is no appeal of any sort pending, so SB 620 is not available.

Brief Synopsis: In considering a petition for resentencing under Senate Bill 620, the judge should consider post-conviction rehabilitation efforts by defendant and conduct in prison, so having a zealous criminal defense attorney write a brief discussing this aspect of defendant’s character is imperative to maximize one’s chances of being resentenced to a lesser term.

In the following summary, Thomas Nolan Yanaga had an active appeal and so 620 was applicable and was applied, but the judge in San Luis Obispo County Superior Court declined to strike the 25 years to life gun enhancement.  Mr. Yanaga then appealed the judge’s ruling, arguing to the Second Appellate District Court in Ventura that the judge abused her discretion.
As the reader may be aware, it is quite difficult to win on appeal if arguing that a judge abused his or her discretion.
Yanaga had been convicted by a jury of second degree murder (Penal Code § 187(a), 189).  The jury found true an enhancement allegation that he had personally and intentionally discharged a firearm causing death (Penal Code § 12022.53(d)).  He was then sentenced to prison for an aggregate term of 15 years to life for second degree murder plus 25 years to life for the firearm enhancement.
In an unpublished opinion, the Second Appellate District affirmed the conviction in 2017 and Yanaga appealed up to the California Supreme Court, which then remanded the case back to the Second Appellate District to reconsider the case in light of Senate Bill 620, which was passed in 2017. 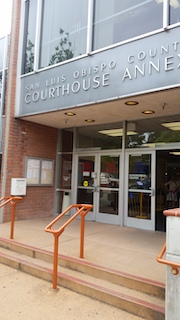 San Luis Obispo Courthouse
Senate Bill 620 amended subdivision (h) of Penal Code § 12022.53 to authorize the striking of a firearm enhancement in the interest of justice under Penal Code § 1385.
In an unpublished opinion, the Second Appellate District reversed the trial court’s imposition of a 25-year-to-life term for the firearm enhancement.  The Second Appellate District then remanded the matter back down to the San Luis Obispo County Superior Court for the trial court judge to exercise its discretion whether to strike the enhancement in the interest of justice pursuant to sections 12022.53(h) and 1385.
The trial court judge declined to exercise such discretion.  The original sentencing judge had retired, so the matter was referred to another judge.  This judge stated on the record that she “had an opportunity to review the entirety of the trial transcripts,” including the pre-trial rulings, the trial testimony, and the . . . sentencing hearing.”
In a critical portion of her ruling, the trial court said she believed her task was “to essentially attempt now to make a determination whether with the evidence that was presented during the trial, the Court would have exercised discretion under 12022.53(h) at the time of the original sentencing to strike the firearm enhancement.”  She was “putting herself back in the situation of the original sentencing judge at the time of sentencing.”
The judge then reviewed the aggravating factors, which she found showed “the crime involved great violence, great bodily harm, threat of great bodily harm, or other acts disclosing a high degree of cruelty, viciousness, or callousness.”  On the other hand, defendant “had either no prior record, or an insignificant record of prior criminal conduct.”  The original sentencing judge, at sentencing, acknowledged that defendant had been a productive member of society, but had “spiraled into a lifestyle that involved associations with people who used drugs . . . and was regularly carrying a firearm.”
The resentencing judge then considered that the victim was shot five times and that the final wound was to his back and that the victim was unarmed.
The resentencing judge said she did not consider appellant’s post-sentencing conduct.  She said, “I don’t believe that that information is appropriately before the Court for purposes of determining whether to exercise discretion because it appears to me that the 12022.53(h) analysis should occur at the time of original sentencing . . . with the information before the sentencing judge, which that judge would not have had. . . . I am not taking that behavior into consideration for the analysis.”
The firearm enhancement as imposed was affirmed and Mr. Yanaga appealed to the Second Appellate District, arguing the judge erred by not considering his post-judgment rehabilitative efforts.
The Second Appellate District (in People v. Thomas Nolan Yanaga (2020 DJDAR 13277)) agreed.  It looked to the second sentence of 12022.53(h), which states “[T]he authority provided by this subdivision apply to any resentencing that may occur pursuant to any other law.”  In other words, in the interest of justice and at the time of resentencing pursuant to any other law, the court may strike the enhancement.  In such cases, the resentencing court may consider factors existing at the time of resentencing, such as defendant’s post-sentencing behavior in prison.”  People v. Arredondo (2018) 21 Cal.App.5th 493, 507.
It follows that a court should not be barred from considering similar factors where, as here, the matter had been remanded for resentencing because the judgement was not final when section 12022.53(h) became effective.  See People v. Robbins (2018) 19 Cal.App.5th 660, 679.
This summary, we should emphasize, means the resentencing judge may consider both good and bad post-sentencing conduct in prison.  So, making efforts in prison to rehabilitate oneself is important.  Joining a violent, racist prison gang, fighting with other inmates and flouting prison rules would be unhelpful for resentencing.
The citation for the Fourth Appellate District Court ruling discussed above is People v. Thomas Nolan Yanaga (4th App. Dist., 2020) 58 Cal. App. 5th 619, 272 Cal. Rptr. 3d 612.
For more information about SB 620 and firearm enhancements, please click on the following articles:
Contact us.
Serving Torrance, Long Beach, Compton, Airport Courthouses and Other Courthouses.