Home
Other Information
Criminal Defense Articles
Can I Seek Resentencing under SB 620 at Any Time?

Can I Seek Resentencing under SB 620 at Any Time?

Summary in 50 Words or Less: One cannot seek resentencing at any time under Senate Bill (SB) 620, which perrmits a judge to use his or her discretion under Penal Code § 1385 (“in the interest of justice”) to remove the sentencing enhancement for use of a firearm in the commission of a crime, must be requested before the sentence is final.  In the following case, defendant sought resentencing after his sentence was final.

Senate Bill 620, giving a sentencing judge discretion to strike a ten-year firearm enhancement, does not automatically apply for anyone who is in prison and was found to have used a firearm in the commission of a felony.  Instead, 620’s provisions under Penal Code § 12022.53(h) are limited to sentences (and judgments) that are not final.  If a judgment of a sentence is final, meaning it can no longer be appealed or reviewed, 620 cannot and does not apply.
The following summary of an actual case and the appeal of the firearm enhancement exemplifies this limited application of 620.
In December of 2007, Mr. Willie Mervyn Johnson used a firearm to shoot and kill his former girlfriend.  In 2009, he was convicted by a jury of second-degree murder.  The jury’s verdict included a finding that it was true he used a firearm in the commission of the murder under Penal Code sections 187, 189 and 12022.53(b).
The judge in Los Angeles County, Mark Windham at the Airport Courthouse, then sentenced Mr. Johnson to a term of fifteen years to life in state prison, plus a ten-year consecutive term for use a firearm.
Mr. Johnson appealed the jury’s verdict in 2011 and the Second Appellate District Court in Los Angeles affirmed the verdict.  Mr. Johnson then appealed to the California Supreme Court, which denied review in 2011.  Mr. Johnson’s time to file a petition for writ of certiorari to the United States Supreme Court expired on September 13, 2011. 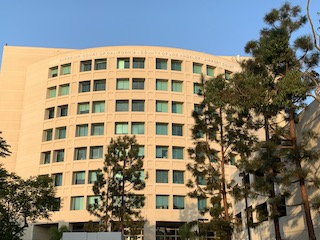 Airport Court
In 2015, Johnson filed a writ for petition of habeas corpus that wound its way up to the United States Supreme Court in 2015, which denied the writ in January, 2015.
In 2015, Johnson filed a motion in state court to reduce the amount of restitution he was ordered to pay.  That motion was denied and the Second Appellate District affirmed the ruling by Judge Windham.  Johnson also filed a motion to set aside the restitution order, which was denied as well.
Senate Bill 620 then became effective on January 1, 2018, allowing a trial court to use its discretion under Penal Code § 1385 to strike a firearm enhancement in the interest of justice “at the time of sentencing.”  In other words, 620 only applied prospectively (not retroactively like many statutes) to sentences that were not yet final.  People v. Woods (2018) 19 Cal.App.4th 1080.
Senate Bill 620 can apply to defendants who have obtained collateral relief by way of a state or federal habeas corpus proceeding.  People v. Arredondo (2018) 21 Cal.App.5th 493 at 507.
On April 9, 2018, Johnson filed a “Motion for Stay of Gun Enhancement (Penal Code § 1385),” which the trial court (Judge Windham) summarily denied.  Johnson then appealed this order to the Second Appellate District, who was by this time quite familiar with Willie Mervyn Johnson.
In its ruling at 2019 DJDAR 1861 on March 4, 2019, the Second Appellate District began its analysis by citing People v. Romero (1994) 8 Cal.4th 728, at 734, which held that a defendant serving his sentence pursuant to a “final” judgment, who asks for resentencing, should receive a “summary denial.”  It continued, explaining that the State of California has a “powerful interest in the finality of its judgments . . . particularly strong in criminal cases, for without finality, the criminal law if deprived of much of its deterrent effect.”  In re Harris (1993) 5 Cal.4th 813, 831. The appellate court further commented that the state has a strong interest in deterring the use of firearms in the commission of a felony.
“For purposes of determining retroactive application of an amendment to a criminal statute, a judgement is not yet final until the time for petitioning for a writ of certiorari in the United States Supreme Court has passed.” People v. Vierra (2005) 35 Cal.4th 264, 305.
For Mr. Johnson here, that time passed in 2011.  His subsequent petitions and motions did not extend the date on which his judgement became final under SB 620 because he did not obtain collateral relief by way of a state or federal habeas corpus proceeding.  Arredondo, supra, at 507.
Therefore, to answer the rhetorical question posed in the title to this article, no, one may not seek resentencing at any time under SB 620, as the case of Mr. Johnson painfully exemplifies.
The citation for the Second Appellate District Court ruling discussed above is People v. Willie Mervyn Johnson (2d App. Dist., 2019) 32 Cal.App.5th 938.
For more information about resentencing issues, please click on the following articles:
Contact us.
Serving Torrance, Long Beach, Compton, Airport Courthouses and Other Courthouses.