SB 1437 Properly Denied When No Prima Facie Case Made

In 1995, Alexander Palacios  lived in Fontana and was friends with George Maldonado (age 18), Lewis Pham (age 16), Harry Nabeshima (age 18) and a few others.  The group called themselves OSK or Old School Krew.

Brief Synopsis: Resentencing under SB 1437 was denied in the following case because petitioner originated the plan to kill to avenge another killing, wore dark clothes to avoid detection and agreed upon a false story to mislead police investigating the crime, so he was a major participant who acted with reckless indifference to human life.

On May 1, 1995, Maldonado and a few others from the OSK tried to rob Roger Coffman, age 16, chasing after him with a knife as he ran into the house where he lived.  Alexander Palacios was not part of this attempted robbery.  At the house, Maldonado and others tried to force their way in.  They were pushed out, but they persisted in trying to kick their way into the home.  Finally, Arthur Peralta (age 16) shot Maldonado, hitting him in the neck.
When Alexander Palacios found out about Maldonado being shot in the neck, he became very angry.  He drove to Lewis Pham’s house and asked about the incident.  He then talked with Harry Nabeshima and decided “to get even.”  Palacios asked Nabeshima to go with back to Peralta’s house to kill him.  Nabeshima said no.  Lewis Pham, however, agreed to go with Palacios to “get even.” The had a .380 caliber gun and ammunition.
Meanwhile, Arthur Peralta had gone to the police station to surrender himself and notify the police about the situation.
That evening, Palacios and Pham drove to Peralta’s house.  As they got close, they turned off the car’s headlights.  They wore dark clothes.  When they parked outside the house, one of the occupants of the Peralta house saw this and suspected something bad was going to happen.  He ushered all the occupants in the house to lay down in a bedroom below window level. 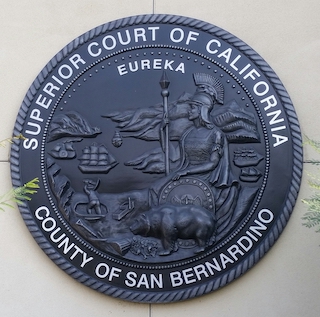 San Bernardino County Court Badge
Finally, someone knocked on the back door of the house, asking for Arthur Peralta.  Someone inside the house answered that he was not at the house.  A few seconds later, two gunshots were fired through the window portion of the door.  Robert Kado White (age 14) was struck by the gunshot and died inside the house.
Arthur Peralta’s mom then saw Alexander Palacios run to the car parked outside, whose motor was still running, and drive off, still with its lights off.
Pham and Palacios then met some other members of the OSK at a video store and Pham bragged about shooting Arthur Palacios.  The OSK group then discussed a story to frustrate police investigation of the case by claiming it was “Mark” who did the shooting and that “Mark” was a member of B & G, a West Covina Filipino gang.
The story had little effect on the police, who arrested Pham and Palacios.  A San Bernardino Court jury convicted Palacios of first-degree murder and found true the allegation that a principal was armed with a firearm in the commission of the murder (Penal Code § 12022(a)(2)).  The judge sentenced Palacios to 25 years to life with the possibility of parole on the murder with a consecutive one-year term for the firearm allegation.
In 2018, the Legislature passed and the Governor signed into law Senate Bill 1437 (SB 1437) that amended the mens rea requirement for murder and restricted the circumstances under which a person can be liable for murder under the felony-murder rule or the natural and probable consequences doctrine.  Senate Bill 1437 also established a procedure permitting certain qualifying persons who were previously convicted of felony murder or murder under the natural and probable consequences doctrine to petition the courts that sentenced them to vacate their murder convictions and obtain resentencing on any remaining counts (Penal Code § 1170.95).
In 2018, Alexander Palacios filed a petition to vacate his first-degree murder conviction and obtain resentencing under Senate Bill 1437.
The trial court denied the petition, commenting “It’s nonsensical to me to apply this law in a case where Defendant was convicted of being a major aider and abettor in going to a house for revenge; and even though he wasn’t the shooter, they sort of came in with guns blazing, and the other Defendant shot the victim.”  The court also explained that the case was not prosecuted under a felony-murder theory, but “an aiding and abetting of an attempted murder that led to the murder of someone else, and so this law does not apply to defendant.”
Palacios appealed this ruling to the Fourth Appellate District Court, which affirmed the trial court, noting that 1437 does not “alter the law regarding the criminal liability of direct aiders and abettors of murder because such persons necessarily know and share the murderous intent of the actual perpetrator.”  People v. Lewis (2020) 43 Cal.App.5th 1128, 1135.  Accordingly, “one who directly aids and abets another who commits murder is thus liable for murder under the new law just as he or she was liable under the old law.”  Id.
We present this summary to the reader as a reminder that 1437 only applies if the earlier conviction was reached under a natural and probable consequences doctrine or in a felony murder.  Here, those rather fundamental requirements were absent and Palacios certainly had the intent to kill, as he hatched the plan of revenge, he solicited others to join him, he drove to the house, he parked the car with the car’s headlights off, he wore dark clothes, he left the car engine on to ease a quick escape and he participated in a story afterwards to try to elude the police.
The citation for the Fourth Appellate District Court ruling discussed above is People v. Alexander Palacios (4th App. Dist., 2020) 58 Cal. App. 5th 845, 273 Cal. Rptr. 3d 1.
For more information about Senate Bill 1437 and relief under Penal Code § 1170.95, please click on the following articles:
Contact us.
Serving Torrance, Long Beach, Compton, Airport Courthouses and Other Courthouses.