Home
Other Information
Criminal Defense Articles
Under SB 1437, Resentence to the Underlying Felony?

Under SB 1437, Resentence to the Underlying Felony?

In the context of the new felony murder rule (SB 1437), a petitioner is eligible to petition the trial court for resentencing when he or she was convicted, either by jury, by bench trial or by a plea, of first or second-degree murder when: 1) the prosecution proceeded on a felony murder or natural and probable consequences theory; 2) petitioner was not the actual killer, 3) petitioner did not act with the intent to kill; and 4) petitioner was not a major participant in the underlying felony who acted with reckless indifference to human life.  See Penal Code § 1170.95; People v. Martinez (2019) 31 Cal.App.5th 719, 723.

The Reader’s Digest Version: If an SB 1437 petition for recall of a sentence and resentencing because the judge determines petitioner could not be convicted of murder under changes to the felony murder rule or that petitioner was convicted as an aider and abettor under the natural and probable consequences doctrine, the court will resentence petitioner on any other charge that petitioner was found to have violated, which can result in a sentence that is time served.

If petitioner meets these four requirements, what can the judge resentence petitioner to?  Manslaughter?  Involuntary manslaughter?  Robbery?
The answer to this question was exemplified in the following First Appellate District opinion in People v. Donnie Howard (2020 DJDAR 2866).
In 2010, Howard and two other defendants were charged with first-degree murder on a felony-murder theory arising after an 80-year-old woman was shot and killed during a burglary of her home.
In 2015, a jury convicted Howard of first-degree murder with a felony-murder special circumstance and found he had been armed in the commission of the offense.  The Alameda County Superior Court judge presiding in the case sentenced Howard to life in prison without the possibility of parole.
Howard then successfully appealed the felony-murder special circumstance when the First Appellate District concluded the evidence was insufficient to show Howard, who was not the actual killer, acted with reckless indifference to human life (People v. Howard (May 30, 2018) A149081 [nonpublished opinion]).  His sentence was then modified to 25 years to life. 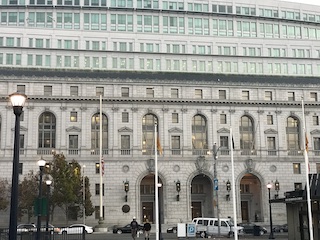 Court of Appeal First Appellate District San Francisco
The case was then remanded to the Alameda County Superior Court when Howard moved to vacate his murder conviction under Penal Code § 1170.95 (SB 1437).  Interestingly, the prosecutor agreed that Howard’s conviction for murder should have been vacated and the trial court judge vacated it.
The parties also agreed that the underlying felony was burglary, but they disagreed on the degree of the offense.  Adopting the prosecution’s interpretation of the statute, the judge redesignated Howard’s conviction as first-degree burglary and sentenced Howard to a six-year prison term, designated the offense a violent felony (under Penal Code § 667.5(c)(21)) and imposed a one-year enhancement for being armed in the commission of the offense (Penal Code § 12022(a)(1)).
Howard then appealed to the First Appellate District, contending his sentence for first-degree burglary was improper.
The First Appellate District affirmed the trial court, finding the underlying felony was “beyond dispute” a first-degree burglary because they burglarized a residence with an occupant of the residence inside, that it was a violent felony and that the arming enhancement under 12022(a)(1) was proper.
The appellate court explained that on the day of the murder, Lionel Harris had gone over to Ayodele Patterson’s house.  When he got there, Patterson took a phone call in another room.  Patterson then came back and told Harris that he had a “lick on [the] line,” meaning he wanted to burglarize a home.  Patterson insisted that Harris come along.  He gave Harris some blue latex gloves to wear.  Patterson had a sawed-off rifle that he took with him.
Harris and Patterson were then joined by Howard.  The three agreed that Harris would serve as the lookout.  Patterson then went into the house.  Harris went into the house, telling Patterson that there was an old lady in the house and they should leave.  Patterson refused.  He found the old lady sitting in her living room on a couch and shot her a total of four times.
Harris was upset at Patterson for shooting the old lady and left without joining in the robbery (Harris later pled out to manslaughter before trial).  Harris told police he never saw Howard inside the house and the last place he saw him was at the side door to the garage of the house.
The next day, however, Howard pawned a piece of gold from the house at an Oakland pawn shop.  The police then interviewed Howard, who denied involvement.
The jury, however, found Howard had been armed and participated in the burglary.  Howard had a prior burglary conviction.
Therefore, the appellate court affirmed the six-year sentence with a one-year enhancement.
The citation for the First Appellate District Court ruling discussed above is People v. Donnie Howard (1st App. Dist., 2020) 50 Cal. App. 5th 727, 264 Cal. Rptr. 3d 388.
For more information about SB 1437, please click on the following articles:
Contact us.
Serving Torrance, Long Beach, Compton, Airport Courthouses and Other Courthouses.