SB 1437 – Does it Apply to Provocative Act Murder?

The Gist of this Article: A murder under the provocative act murder theory is not affected by Senate Bill 1437’s changes to the felony murder rule or natural and probable consequences doctrine, so a petition for resentencing under 1437 will be denied if one was found to have committed a provocative act murder.

On March 8, 1993, at about 8:00 p.m., Derrick Dante Swanson and Anthony Chapple robbed four individuals at gunpoint at a Long Beach gas station.  One of the victims, Ruben Garcia, worked at the gas station.  The other victims were Garcia’s wife Rosa, his brother and a female customer.
Swanson and Chapple forced the victims into a storage room where they took Rosa’s jewelry and purse and several cartons of cigarettes.  Then Swanson, who had been told that Rosa was pregnant, grabbed her by the hair and dragged her into the front office.  He called her a “fucking bitch” and told her he would kill her if she did not open the safe.
Rosa told Swanson that she did not have the keys and, in response, Swanson shoved her to the ground.  When Garcia tried to stop Swanson, Chapple threatened to shoot Garcia’s brother.  Meanwhile, Swanson and Chapple emptied the cash register and took all the money in Garcia’s wallet.
Just before they left, Swanson pointed his gun at Garcia and Rosa and gratuitously fired one shot, missing Garcia and Rosa, but causing Rosa to scream.  Garcia then grabbed his gun from a desk drawer, loaded it and gave chase, believing Rosa had been shot.  Garcia shot and killed Chapple. 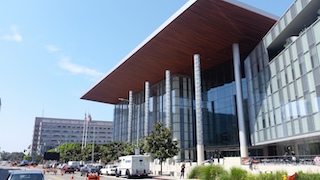 Long Beach Courthouse
Derrick Swanson was then convicted of first degree murder under the provocative act doctrine, as well as assault with a firearm (Penal Code § 245(a)(2)) and four counts of second degree robbery (Penal Code § 211).  The jury found true the allegation that he personally used a firearm to commit the crimes (Penal Code § 12022.5(a).  He was sentenced to state prison for 32 years to life.
On direct appeal, his conviction was affirmed.  The appellate court noted Swanson’s apparent willingness to engage in needless acts of violence, the jury could conclude that Garcia reasonably believed Swanson and Chapple might return to kill the victims even though the appeared to have fled, and killed Chapple in a “reasonable response to [Swanson’s] provocative conduct.”  People v. Swanson (July 31, 1995, B085170, [nonpublished opinion]), p. 4.
After Senate Bill No. 1437 became the law in 2018, Mr. Swanson filed a petition for writ of habeas corpus arguing he was eligible for resentencing under Penal Code § 1170.95.  He argued that he was found guilty of first degree murder under a felony murder theory.
Judge Gary J. Ferrari in the Long Beach Superior Court construed the petition for writ of habeas corpus as a petition for resentencing and summarily denied the petition, finding that as a matter of law that he was ineligible for relief because he was convicted under the provocative act doctrine, not under the felony murder rule or under the natural and probable consequences doctrine.  Judge Ferrari therefore denied the petition without appointing counsel or holding an evidentiary hearing.
Mr. Swanson appealed the petition’s denial to the Second Appellate District Court in downtown Los Angeles, which affirmed Judge Ferrari.
Swanson argued that the provocative act doctrine is merely a version of the natural and probable consequences doctrine and first degree provocative act murder is “inextricably intertwined” with the felony murder rule.
The Second Appellate District noted, in its response to Swanson’s argument, the origins of the provocative act murder doctrine established by the California Supreme Court in People v. Gilbert (1965) 63 Cal.2d 690.  In Gilbert, the highest court in California, explained that “when a defendant acts in conscious disregard for life and intentionally commits an act that is likely to cause death and his victim or a police officer kills in reasonable response to such act, defendant is guilty of murder.” Id. at 704.
The appellate court noted that provocative act murder traditionally is invoked in gun battle killings wherein defendant gets into a gun battle with a police officer and the police officer uses privileged lethal force by shooting back and kills the perpetrator’s accomplice or an innocent bystander. People v. Cervantes (2001) 26 Cal.4th 860, 867.
In provocative act murder, defendant must have a mens rea of malice, whereas under the natural and probable consequences doctrine liability arose when “a reasonable person in the defendant’s position would have or should have known that the charged offense was a reasonably foreseeable consequence of the act aided and abetted.”  People v. Chiu (2014) 59 Cal.4th 155, at 162.
Consequently, the appellate court disagreed with Swanson that the provocative act doctrine is merely a version of the natural and probable consequences doctrine because the mens rea differs for each type of murder.
The appellate court also disagreed with Swanson's argument that first degree provocative act murder is “inextricably intertwined” with the felony murder rule because the provocative act killing takes place separately and distinct from, or after the underlying felony is complete.
We present this summary to help the reader better under provocative act murder and how it is not a valid candidate for resentencing under Senate Bill No. 1437.
The citation for the Second Appellate District Court ruling discussed above is People v. Derrick Dante Swanson (2nd App. Dist., 2021) 57 Cal. App. 5th 604, 272 Cal. Rptr. 3d 1.
For more information about provocative act murder and SB 1437 relief, please click on the following articles:
Contact us.
Serving Torrance, Long Beach, Compton, Airport Courthouses and Other Courthouses.