When a person is convicted of second-degree murder in a DUI, that person is the actual killer of the victim.  While this may seem clear, it apparently was not so clear to Mr. Marlon Mafrend Roldan, who was convicted in Long Beach Superior Court of second degree murder under an implied malice theory for killing a person while driving under the influence of alcohol (DUI), called a Watson murder after People v. Watson (1981) 30 Cal.3d 290, which held that an intoxicated driver who causes death can be charged with second degree murder.

Brief Synopsis: Relief under Penal Code § 1170.95 (senate Bill 1437) is not available to one prosecuted under second degree murder in a DUI under an implied malice theory because it was not brought under a felony murder theory or under the natural and probable consequences doctrine.  Moreover, defendant was not an aider or abettor and defendant was the actual killer.

The underlying case arose on the evening of December 15, 2008, when Mr. Roldan consumed several alcoholic drinks at a party.  He then drove his van toward his home, but fell asleep at the wheel, crossed a center line, and collided with an SUV traveling in the opposite direction, killing a passenger in the SUV and injuring the driver.
The case against him proceeded before Judge Judith Meyer in Long Beach Superior Court.  She is a sharp judge with a wealth of experience.  The jury convicted Roldan of second degree murder, gross vehicular manslaughter while intoxicated, DUI causing injury, causing injury while driving with a 0.08% or higher blood-alcohol concentration, driving with a suspended license and failing to provide evidence of financial responsibility (insurance) with a finding that he inflicted great bodily injury on the SUV’s driver.
Judge Meyer sentenced him to 22 years to life plus six months in prison.  On direct appeal, the conviction was affirmed, but the sentence was reduced to 19 years to life plus six months.
In 2018, about ten years later, the California Legislature enacted Senate Bill 1437, which amended the natural and probable consequences doctrine, as it relates to felony murder, to ensure that murder liability is not imposed on a person who is not the actual killer, did not act with the intent to kill, or was not a major participant in the underlying felony who acted with reckless indifference to human life.  If someone was convicted under a natural and probable consequences theory, that person can petition for vacating the sentence and resentencing, which usually results in a conviction on an alternative theory with less time as the sentence. 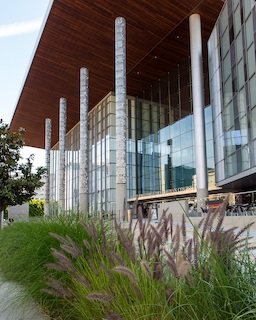 Long Beach Courthouse
In March of 2019, Mr. Roldan filed a form petition to vacate his sentence and for resentencing.  It the petition, he stated under penalty of perjury that he was convicted on a natural and probable consequences theory.
Judge Meyer summarily denied his petition without appointing counsel, finding he was ineligible for relief because he had not been convicted under a natural and probable consequences theory.
Mr. Roldan then appealed this ruling to the Second Appellate District Court in Los Angeles, which affirmed Judge Meyer in People v. Marlon Mafrend Roldan (2020 DJDAR 11839).
The appellate court began its analysis by reminding the reader that “a conviction for murder requires the commission of an act that causes death, done with the mental state of malice aforethought.”  People v. Gonzalez (2012) 54 Cal.4th 643, 653.  “Malice may be either express or implied . . . malice is implied when a person willfully does an act, the natural and probable consequences of which are dangerous to human life, and the person knowingly acts with conscious disregard for the danger to life that the act poses . . . The law recognizes two degrees of murder . . . A person who kills unlawfully with implied malice is guilty of second degree murder.”  Id.
Malice may be implied when a person willfully drives under the influence of alcohol  Watson, supra, at 294.
The Second Appellate District therefore found, affirming Judge Meyer, that Roldan was convicted under a theory of actual implied malice, not malice imputed under the natural and probable consequences doctrine and thus failed to meet the threshold requirement under SB 1437 and Penal Code § 1170.95 of showing he was convicted under a natural and probable consequences theory.
Roldan argued that Watson itself is a natural and probable consequences theory, but the appellate court disagreed.  SB 1437 did nothing to remove implied malice as a basis for a second degree murder conviction.
This issue is certainly a subtlety that may frustrate the reader, which is why we present this article to clarify that a Watson murder in DUI is an implied malice murder, therefore second degree, and not under a natural and probable consequences theory.  Perhaps an easier and more direct way to understand this is that in a Watson murder, defendant is the actual killer as well, so that fact in and of itself disqualifies one from 1437 relief.
The citation for the Second Appellate District Court ruling discussed above is People v. Marlon Mafrend Roldan (2nd App. Dist., 2020) 56 Cal. App. 5th 997, 271 Cal. Rptr. 3d 63.
For more information about Senate Bill 1437 resentencing and murder, please click on the following articles:
Contact us.
Serving Torrance, Long Beach, Compton, Airport Courthouses and Other Courthouses.