Home
Other Information
Criminal Defense Articles
What Is Murder (PC 187)? The Defenses? The Punishment?

What Is Murder (PC 187)? The Defenses? The Punishment?

No crime is more documented, fictionalized or dramatized by our media than murder, and rightly so.  It is considered by many to be the worst crime possible.  It can be fueled by a patient, jealous rage.  It can involve weapons, from guns to knives to a car, or something like arsenic.  It can happen while someone is committing another felony.  Its effects on families last forever, from that of the victim to even the suspect.

What is murder?  California Penal Code § 187(a) defines murder as an act, with malice, that causes the death of another person (or fetus) without a lawful excuse or legal justification.  It is a strike offense under the California “Three Strikes Law” that specifies certain violent or serious felonies.

Why This Article Matters: Murder is an extremely complex area of the law, but with the recent passage of Senate Bill (SB) 1437, the felony murder rule has been modified to eliminate first-degree murder liability for aiders and abettors under the natural and probable consequences theory if the accessory was not a major participant acting with reckless indifference to human life.  Sentencing for a murder can be complex, with many enhancements that have specific rules as to when they apply and do not apply.

Breaking down the definition of murder first involves the mental state of defendant.  The person must act with “malice aforethought,” which loosely means with the specific intent.  This means the killing is not spontaneous, i.e. if someone finds his wife in bed with another man and kills the other man immediately.  Malice aforethought can involves deliberation and purposeful conduct, which is express malice, but “willful and wanton disregard for human life” can also qualify, which is considered implied malice.  A lawful or legal excuse involves defenses that are described later in this short article. 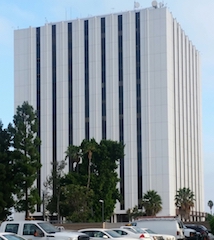 Compton Courthouse
There are four basic types of murder.  First degree murder is the deliberate, premeditated and willful killing of another.  The classic example involves lying in wait or killing someone by using torture.
Second degree involves willful conduct that is inherently dangerous to human life, but not the deliberate killing of another.  This can include committing arson to a building that one believes is empty, manufacturing meth around others, or committing mayhem, although the defendant may not have fully realized the risks to life.

Felony murder involves the death of another while someone is committing an inherently dangerous felony such as robbing a bank with loaded guns, carjacking, committing mayhem, kidnapping, train wrecking, torture, rape, sodomy, forcible acts of sexual penetration and forcible oral copulation, as well as even lewd acts with a minor.

Capital murder is even worse than first degree murder.  It includes special circumstances such as killing someone for financial gain, killing a police officer or firefighter or judge or prosecutor, murdering a witness to prevent his or her testimony, a hate crime murder, or killing for the benefit of a criminal street gang.

The most common defenses to murder involve self-defense, necessity, mistaken identity (including coerced confessions and unfairly suggestive line ups), lack of the required intent (“it was an accident”), causation, insanity (the person did not understand the nature and consequences of the act or the person could not distinguish between right and wrong), among others.

Asserting such defenses can help to persuade the prosecutor to amend the complaint to instead allege voluntary manslaughter (Penal Code § 192(a)), involuntary manslaughter (Penal Code § 192(b)) (i.e. the person still had conscious disregard for life), vehicular manslaughter (this can even be a misdemeanor) or aiding a suicide (Penal Code § 401).  If the prosecution does amend the complaint to any of these causes of action, defendant may be able to instead enter a plea bargain to one of these charges instead of murder and receive less punishment.

When a murder involves special circumstances, it is also called “capital murder” because defendant’s punishment is a sentence of life in prison without the possibility of parole or a sentence of death.  Execution in California is by gas or lethal injection.

There are many sentencing enhancements that can apply.  These include that the murder was committed for the benefit of a criminal street gang (minimum enhancement is fifteen years), that it involved the use a firearm (this can add ten, twenty or twenty-five years to life), that it was a “hate crime” (based on one’s race, nationality, gender, disability, religion, sexual preference or nationality).  When the crime is found be to be a “hate crime,” the punishment is life in prison without the possibility of parole.

As the above suggests, murder can be a complicated offense to defend and properly handle.  Not only are there a multitude of defenses and ways to mitigate the conduct, there are better ways to do so than others, especially in handling motions to suppress, motions for discovery, Pitchess motions and many others.  An experienced criminal defense attorney who has handled such cases is a must.

For more information about murder, attempted murder and the judicial process in general, please click on the following articles:
Contact us.
Serving Torrance, Long Beach, Compton, Airport Courthouses and Other Courthouses.