Our client, age 34, went to a private party in Santa Monica for people from his work.  He had several drinks and yet was itching to leave because he found more time with the people he worked was not the best use of this time.
He therefore left the party and ventured out to explore a few of the Main Street bars in Santa Monica.  He had not been in any in many years and was curious to see the “new” bars.  He went into several and ended up ordering a beer at several, just to sample half of it or so and linger in the bar for a while, rather than walk in and walk out like a tourist.
After getting an idea of what the recently added bars had to offer, our client headed to a corner where he planned on meeting an Uber driver for his trip home.  The client forgot to use the restroom at the last bar and had an Uber driver ETA of two minutes according to his phone.
Our client therefore found a dark area near the corner where two buildings met, in the shadows.  This was a perfect, discreet location to urinate away from public view, so thought our client.
Unfortunately, the Santa Monica police patrolling the area on foot were quite familiar with this well-used dark area for urinating.  They allegedly observed our client urinating against the brick wall there.  As one of the officers was activating his body-camera to film our client, our client finished up and turned around, only to see the officer.  Our client apologized to the officer, who was obviously watching our client.
Our client had no criminal history of any type, so he was confused when the officer asked for our client’s driver’s license and, upon receiving it, began writing out a ticket for our client.  Our client was then handed the ticket and asked to sign a promise to appear in the Airport Courthouse on La Cienega Boulevard, which our client signed.  Issuance of the ticket was so fast that our client still managed to catch his Uber.
Once safe at home, our client looked at the ticket more closely and realized with some sense of panic that public urination under Santa Monica Municipal Code § 5.08.110(d) was a misdemeanor.  It was not a $10 ticket, like perhaps a parking ticket.  He then scoured the Internet and found out he could be sent to jail for six months for this offense and / or fined up to $1,000.  He did not realize it was so serious.
He then called up Greg Hill & Associates and spoke with Greg Hill.  The client explained what had happened and his concerns over having a misdemeanor on his record.  He was worried about being let go by his employer.
misdemeanor violation of 5.08.110(d) to add an infraction-level violation of Penal Code § 415(2), making a loud noise that disturbs the peace of another if the client attends ten Alcoholics Anonymous (AA) meetings and performs two days of approved community service.  To help make such a resolution more likely, Greg suggested that the client attend ten AA meetings proactively, even before the first court appearance (the arraignment) to let Greg take to court to show the Santa Monica City Attorney assigned to the case.
The client was somewhat relieved to hear this possible outcome and eagerly attended ten AA meetings prior to the arraignment. 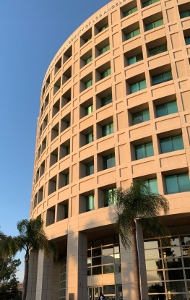 Airport Superior Courthouse
Greg then took the AA sign-in sheet to the arraignment, along with the client’s resume, to show the handling prosecutor.  The prosecutor looked over the police report, our client’s criminal history, the AA sign-in sheet and our client’s resume.  She then agreed to amend the complaint to allege an infraction for disturbing the peace as a violation of Penal Code § 415(2) if the client performed two days of approved community service.
The arraignment was then continued by Greg for six weeks to give our client time to perform the community service.
Greg explained the deal the prosecutor proposed and the client readily agreed to complete the two days of community service as soon as possible.  He then did the community service as he promised and gave Greg proof of completing this, on a document with a blue stamp from the Volunteer Center certifying it was truly finished.
Greg then took this to court at the continued arraignment and the misdemeanor was dismissed upon our client entering a plea of no contest to just the infraction.  This was good for the client because there was no probation, even informal probation, associated with an infraction and his employer was not concerned with him suffering a conviction for an infraction.  The client was happy to avoid these problems and continue working.
For more information about the issues in this case, please click on the following articles:
Contact us.