Our client was driving northbound on Pacific Avenue in San Pedro. It was about 10:40 p.m. on a Saturday evening. He was heading home to Long Beach. He had been out with friends, but had called it an early evening. He had to work in Gardena in the afternoon on Sunday anyways.

As he was approaching the intersection with Seventh Street, he decided to drink a 40-ounce bottle of Corona. He unscrewed the top and dropped the beer bottle. Beer was spilling everywhere, so he reached down to grab the bottle before it got the inside of his car soaked with beer and the smell of beer.

As he reached down, his car veered left into oncoming traffic and he ran head-on into another car, a 2009 Honda Accord heading southbound on Pacific. Luckily, no one in the Honda Accord was injured and our client also was not injured, although his airbags inflated.

Paramedics were nonetheless called to the scene, but both parties denied any injuries and after a while, the paramedics left.

Officers from the Harbor Division of the Los Angeles Police Department were also dispatched to the scene. They reportedly noticed our client, age 23, had slurred speech and that he emitted the odor of alcohol. The beer had pretty much emptied itself over the whole inside of our client’s car because the force of the head-on impact caused the bottle to fly around inside the car, spraying the interior with the smell of beer. 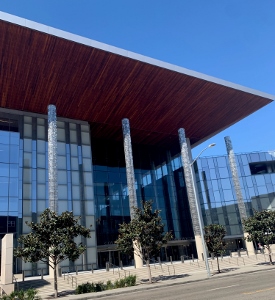 Our client also allegedly had an unsteady gait, which could have been more due to his having just been involved in a head-on car accident. Officers further noticed, allegedly, blood-shot, watery eyes, but his booking photo taken about two hours later displayed nothing of the sort.

Our client was immediately arrested, as is legally allowed in a suspected DUI when there is an accident. He then asserted his right to remain silent, as he knew this was a serious incident.

Our client was also suspected of being under the influence of drugs. Our client volunteered for a drug test, so besides a blood test for alcohol, officers asked the phlebologist to screen the blood for all of the more common illegal controlled substances.

The client was then released on his own recognizance and his parents in Long Beach picked him up from the 77th Precinct station of the Los Angeles Police Department after letting him wait in jail for four days, even having his arraignment in the Long Beach Superior Court the following Tuesday afternoon. He had been first taken to the Harbor Division office, but then transferred to the 77th Precinct office.

The parents thought the case was about DUI, but when Greg spoke to the client separately, he mentioned that he had also been smoking marijuana with his friends at their apartment in San Pedro. Greg also discussed how he expected the case to be handled, which he explained would be handled by the Los Angeles City Attorney’s office due to the location of the DUI being in San Pedro. When Greg asked the parents what their son’s blood alcohol content (BAC) was, they did not know, nor did their son. Apparently, the public defender did not discuss this with the client.

However, the Los Angeles City Attorney’s first offer was 90 days in county jail for the car accident, plus three years of informal probation, the three-month alcohol awareness program (AB541), a $500 court fine plus penalties and assessments, the Hospital and Morgue (HAM) program and the Mothers Against Drunk Driving (MADD) Victim Impact Panel (VIP). Greg was shocked at such an offer with so much jail when no one was injured.

At the first pre-trial hearing, Greg substituted in as counsel of record and saw the blood results. The client actually has a 0.0% BAC, most likely because officers had waited almost three hours to have his blood drawn.

However, the client’s blood tested positive for 1) cocaine metabolite; 2) cannabinoids (marijuana); 3) methamphetamine; and 4) benzodiazepines (Xanax). Many of these substances have a short half-life, with the exception of marijuana, so it was remarkable that there were sufficient quantities to trigger a positive test nearly three hours after the latest time the client could have possibly ingested each one.

Greg discussed the results with the Los Angeles City Attorney and pointed out that none of the tests quantified the amounts of any of the substances, so Greg needed to have the blood retested for this. After all, if the quantities were so low that they could not have any effect in impairing one’s driving, they were legally meaningless. Upon hearing this, the Los Angeles City Attorney agreed to drop all jail time if Greg agreed not to have the blood retested.

Greg explained these blood results to the client and explained that with his four days of credit for time in custody, the plea bargain offered would actually mean he owed no jail time and no fines or fees, but would still nonetheless need to attend and complete the AB541, HAM and MADD VIP program.

Greg recommended that the client accept the offer and he did. The parents were very happy that their son avoided the 90 days in county jail after Greg was retained and explained to the City Attorney how he planned to retest the blood evidence.

For more information about DUI issues raised by this case summary, please click on the following articles: