In November 2012, California voters approved Proposition 36 (“Prop 36”) to amend the provisions of the state’s Three Strikes Law (Penal Code §§ 667(b) to (j) and § 1170.12).  The amendment also provided authority to allow a prisoner to seek modification of a sentence imposed as punishment for a “Third Strike,” if the offense was not a serious or violent felony.

Brief Synopsis:  To request resentencing of a Third Strike sentence when the felony conviction at issue is not for a serious or violent felony, the court will need extensive documentation, including his prison files and all court files, to evaluate if the person is a danger to public safety if resentenced.

The California Department of Corrections and Rehabilitation (CDCR) approximates that about 2,800 inmates are eligible to petition for resentencing under Prop 36.  Rather than face an indeterminate sentence of 25 years to life, as is the sentence for certain qualifying “Third Strike” offenses, such inmates could receive a sentence that is effectively already served. 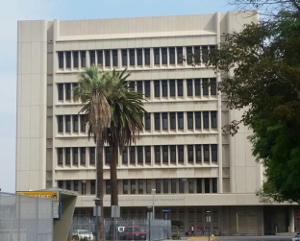 Inglewood Courthouse
When a judge is asked to resentence an inmate seeking a new sentence under this law, the judge must evaluate an inmate’s danger or risk to public safety.  To do this, the judge must review the inmate’s court and prison files.  It can be difficult to simply gather up, as this author’s office has repeatedly experienced, such files. Many older court files are misplaced, others were reduced to microfiche format, others have missing contents and, in some cases, the files are in different countries, and, logistically, tough to move to a different part of the state.
The CDCR quickly recognized the practical difficulties posed by Prop 36.  So far, it has assigned certain CDCR staff to the necessary jobs of photocopying the typically voluminous prisoner files that a petitioner must provide to a judge evaluating the prisoner’s risk to public safety.  Such files are identified for photocopying usually because a public defender or private attorney subpoenas the files for a resentencing petition.

Sometimes, such files are simply requested by the public defenders representing such inmates and the CDCR releases such files without a subpoena, to be shared with the District Attorney’s office assigned to the petition. This informal method has apparently worked well in the first four months, but the tidal wave of petitions has not really started in earnest.

Our office has received perhaps a half dozen calls concerning this process.  We believe inmates are spreading the word within the prisons and educating themselves about their eligibility for reduced sentences.

Family and girlfriends/boyfriends have contacted us, asking how they can proceed.  Often, they are unable to describe much of their loved one’s criminal history.

There are unfortunately going to be prisoners whose risk to public safety is too high for a judge to resentence the individual.  At the same time, there will be prisoners who are eligible for resentencing who do not even apply, sadly because they have no family, friends or other inmates to advise them about their rights.  Such individuals also may have given up on being released or may be mentally disadvantaged.

Turning to how our courts will evaluate the public safety risks posed by a petitioner if resentenced (and released), no trend has been publicly noted yet.  It is easy to understand that judges may “err on the side of caution” and deny quite a few of the petitions.  After all, no judge wants to be identified as the judge who modified a sentence of an inmate who is released early, only to commit a serious or violent felony.

However, judges will also want to shorten sentences and even release inmates based on having served the new sentence (“time served”) when the inmate is not a threat to public safety. The judge will also want to recognize and reward inmates who have seemingly reformed themselves and matured, becoming ready to reintegrate into society as law-abiding citizens.