Why This Article Matters:  Under Prop 36, also known as the Three Strikes Reform Act, spousal rape is a serious and violent felony.  Thus, a person convicted of this with two prior strikes, faces a minimum indeterminate sentence of 25 years to life in state prison.

The new provisions allowed resentencing of a defendant when a defendant has a third strike resulting in an indeterminate life sentence.  Under the original Three Strike Act, anyone with two or more strikes who is convicted of any new felony, no matter how minor, is subject to an indeterminate life sentence with a minimum term of twenty-five years.

Under the revised statute, however, only serious or violent felonies would be eligible for sentencing as third strikes, with the consequential minimum indeterminate sentence of 25 years to life.  If the individual, with two qualifying strikes, is convicted of a non-serious and non-violent felony, he or she is now sentenced as if it is second strike again, meaning the base term of the sentence is doubled, with certain exceptions. 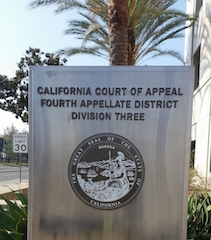 Court of Appeal 4th District Division 3 Orange County
Joe Martinez was convicted in 2008 of inflicting corporal injury on his wife (Penal Code § 273.5(a)); attempted forcible sodomy (Penal Code § 664 and 286(c)(2)); attempted forcible sexual penetration (Penal Code § 664 and 289(a)(1)) and spousal rape (Penal Code § 262(a)(1)).  The jury found that Martinez had two prior strike convictions for robbery (Penal Code § 211).
At sentencing, Martinez filed a Romero motion to strike his two prior strikes as to all counts.  The trial court granted the motion, but only as to two of the four counts.  The court then sentenced Martinez as a third strike offender to an indeterminate term of 50 years to life in prison, consisting of consecutive terms of 25 years to life on the 273.5 (a) count and the spousal rape count.

After Prop 36 went into effect, Martinez filed a petition to recall his sentence and for resentencing under Penal Code § 1170.126.  The trial court denied the petition, holding that Martinez was disqualified from resentencing because spousal rape and forcible sodomy are serious and violent felonies.

Martinez appealed the ruling to the Fourth Appellate District.  The appellate court noted at the outset that Martinez’s appeal was barred because the lower court’s ruling was not appealable.

The appellate court, however, decided to use its discretion and instead consider Martinez’s appeal as a writ of habeas corpus, as the issue was novel and a matter of general concern.  In re Joe Martinez (2014 DJDAR 1263).

Martinez did not address the fact that he was also sentenced on spousal rape and attempted forcible sodomy, which are both serious felonies under Penal Code § 1192.7(c).

The District Attorney argued that the court was required to consider all offenses that led to the sentence of 50 years to life.

The court of appeals understood Martinez to be arguing that spousal rape and attempted forcible sodomy should play no role in consideration of sentencing.  The court of appeals bluntly commented, “we see no logic in this argument.”  The court further stated, “because he was convicted of spousal rape [and attempted forcible sodomy], Martinez proves himself to be one of the truly dangerous criminals the Act was intended to keep in prison.”

Thus, the appeals court concluded that the trial court correctly found Martinez was not eligible for resentencing under Prop 36.
The citation for the Fourth Appellate court ruling discussed above is In re Martinez (4th App. Dist., 2014) 223 Cal.App.4th 610.
For more information about Three Strikes, click on the following articles: