California’s Three Strikes law contains sentencing requirements that add time to one’s sentence if the individual has a prior conviction for a “strike offense.”  “Strike offenses” are generally described as serious or violent felonies, such as murder, rape, armed robbery and arson, but can include other offenses that seem, by comparison, not too serious or violent.  This often results in sentences one court described as “arbitrary, capricious and patently absurd.”

Brief Synopsis:  Appellate court reverses a trial court judge who denied a Romero motion to strike three prior strikes.  The appellate court’s ruling caused a 150 year sentence to be vacated.

Perhaps epitomizing such a problem with the Three Strike law is the case of Dewone T. Smith, who was sentenced to 150 years to life for what was certainly far, far from murder, rape or armed robbery.  Mr. Smith challenged his sentence, imposed by a Los Angeles County Superior Court judge, in appealing to the Second Appellate District.  In a recently published opinion, the Appellate Court overturned the sentence (2012 DJDAR 2530).

The sentence was imposed by Los Angeles County Superior Court judge Jose Sandoval in the Clara Shortridge Foltz downtown courthouse after a jury found Smith guilty of custodial possession of a weapon (Penal Code § 4502(a)), resisting a police officer (Penal Code § 69) and three counts of battery by gassing (Penal Code § 243.9), while Smith was in county jail.  The weapon was a pencil taped to two spoons.  It was not used on anyone.  The resisting arrest arose out of Smith punching an officer when arrested.  The battery by gassing related to two incidents wherein Smith tossed a mixture of feces and urine in a bowl at officers. 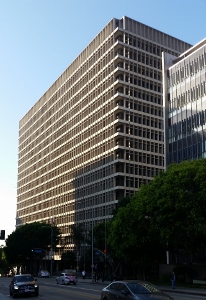 Clara Shortridge Foltz Criminal Justice Center
At trial, Smith’s counsel asked the judge to vacate three of his prior strikes for purposes of sentencing, as is possible under Penal Code § 1385 and People v. Superior Court (Romero) (1996) 13 Cal.4th 497.  Smith’s counsel asked the judge to reduce the sentence by “striking the strikes,” in light of Smith’s mental illness, the error by Los Angeles County in placing Smith in county jail and not prison, the effect of having a mentally ill person housed at county jail, and the relatively minor nature of the commitment offenses (criminal threats and a battery by gassing on a police officer related to a prior offense).

In considering the trial court’s decision denying Smith’s request to “strike the strikes,” the appellate court notes that the first of the three strikes was in 1989, when Smith was still a juvenile.  That offense was treated more as a mental illness, as Smith was sentenced for a ninety day diagnostic evaluation of his mental capacity and stability.  The second strike was a federal conviction for armed bank robbery.  The third offense was for criminal threats in 2007.  Smith argued that the first two strikes were remote in time and therefore not indicative of a career criminal.  Smith argued that the strike for criminal threats was more related to his mental illness and the threats really should not have been taken seriously.

The appellate court agreed that the outright denial of the motion to strike the strikes was made in error.  It consequently vacated the 150 years to life sentence, however, it did not specifically agree with Smith’s arguments on appeal.  It only held that the case should be sent back to the downtown Los Angeles Court for further proceedings as to sentencing, with instructions that the trial judge give weight to Smith’s mental illness and the relatively minor nature of the commitment offenses (possession of the weapon, resisting arrest and battery by gassing on a police officer).

For more information about sentencing issues with strikes, click on the following articles:
For case summaries of selected cases our firm has handled, click here.