Brief Synopsis: Senate Bill 1393’s intent is to prevent excessive punishment, but since a prior serious felony conviction is a strike, a petition for resentencing under SB 1393 may be regarded as inappropriate if a Romero motion was granted as to the prior strike, as the following summary exemplifies.

The new law has triggered a wave of phone calls to our office, often in cases where it does not apply because the law is not retroactive to cases wherein the sentence is final, or when it does apply, in the underlying case, the judge commonly already granted a Romero motion to “strike a strike” just for purposes of sentencing.  People v. Superior Court (Romero) (1996) 13 Cal.4th 497.  In other words, defendant already enjoyed a “windfall” of sorts by avoiding perhaps a third-strike case with an indeterminate life sentence, so returning to court to ask the judge to strike or more serious felonies borders on or simply appears unappreciative, blind to the luck already received, or simply stupid.
The following case out of the Long Beach Superior Court, involving two judges we respect from significant time in their courtrooms, epitomizes this awkward situation.  Anyone contemplating a petition for resentencing under SB 1393 should be familiar with this case, as it is somewhat of a cautionary tale.
In October 2016, in Long Beach, Mr. Demetric Brooks intervened in a fight between his girlfriend, April D., and her roommate.  Mr. Brooks eventually started arguing with April D. and the argument progressed to the point where Mr. Brooks threatened to burn her with hot water that was boiling in the apartment’s kitchen.  April D. did not take the threat seriously and, in response, Mr. Brooks threw the boiling water on her. 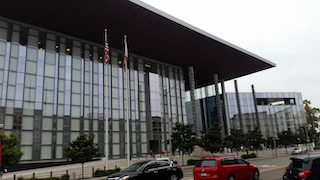 Long Beach Courthouse
April D. lifted her shirt to “see the damage” and saw her skin “hanging off.”  She then ran to the second-floor apartment’s balcony to yell for help.  Mr. Brooks ran after her and tried to push her off the balcony.  He also hit her in the head with a leg from a table.
Brooks fled the scene before police arrived, but was arrested shortly thereafter.  While in the police car, he repeatedly kicked at one of the windows in the car and damaged the frame of the window.
Brooks took the case to trial.  The judge in the case was Mark Kim, an excellent, experienced and kind judge.  The jury convicted Mr. Brooks of mayhem (Penal Code § 203 (a strike)), assault with a deadly weapon (Penal Code § 245(a)(1) (a strike)), domestic violence (Penal Code § 273.5(a)), misdemeanor vandalism (Penal Code § 594(a)) and resisting an executive officer (Penal Code § 69).
The jury also found true allegations, in connection with the assault with a deadly weapon charge and the domestic violence charge, that Mr. Brooks had personally inflicted great bodily injury under Penal Code §§ 12022.7(a) and (e)).
Judge Kim further found that Mr. Brooks has suffered prior serious or violent felonies for second-degree robbery (Penal Code § 211) in 2004 and burglary (Penal Code § 459) in 1991 (Penal Code §§ 667(d) and 1170.12(b).  Judge Kim further found true these prior convictions for enhancement under Penal Code § 667(a)(1), which is what Senate Bill 1393 later addressed, but was not yet effective when Mr. Brooks was sentenced.
At sentencing in February 2018, Judge Kim granted Mr. Brooks’ Romero motion over the People’s objection and struck Brooks’ prior conviction for burglary because it was over 27 years old.  This ruling prevented Brooks from receiving a third-striker sentence of 25 years to life before enhancements were added.
Judge Kim then sentenced Mr. Brooks to a total of 27 years and four months in state prison, which included ten years, which was five years for each prior serious felony.
While Brooks’ appeal of his underlying conviction was pending, Senate Bill 1393 became effective.  The Second Appellate District affirmed the underlying conviction, but remanded the case to the trial court to allow the judge to decide whether to strike either of the five-year enhancements, pursuant to the judge’s discretion permitted by SB 1393.
On remand, the case was assigned to Judge Judith Meyer.  After hearing argument by Brooks’ attorney, Judge Meyer declined to strike either of the two five-year enhancements.  She stated, “I think, to me, what is most telling is the break that was already given to Mr. Brooks” when the trial court granted Brooks’ Romero motion so that there was no life sentence.
Judge Meyer further referred to Brooks as having “quite a criminal history,” including a first-degree residential burglary, a 211 robbery from 2003 and “drug cases.”  “At some point in time,” Judge Meyer explained, “although the courts have been working a little bit more toward rehabilitation on a lot of things, on a crime of this nature, the goal of the sentence was [flat out] punishment, not rehabilitation.”
Brooks then appealed Judge Meyers’ denial of his 1393 petition.  The Second Appellate District (at 2020 DJDAR 6180) made it clear that the case was not remanded for resentencing.  It was remanded for a decision whether to resentence, which Judge Meyer decided not to exercise discretion in favor of resentencing.  The appellate court further ruled that Judge Meyer did not abuse her discretion and had carefully considered Brooks’ criminal history, as is allowed under California Rules of Court, Rule 4.410, which states “the sentencing judge must consider which objectives are of primary importance in the particular case.”
We present this summary as a sobering reminder of how SB 1393 is implemented.  Resentencing is not guaranteed at all, as Judge Meyer explained quite clearly.  We hope her ruling helps anyone seeking to better understand SB 1393.
The citation for the Second Appellate District Court ruling discussed above is People v. Demetric Brooks (2d App. Dist., 2020) 53 Cal. App. 5th 919, 267 Cal. Rptr. 3d 855.
For more information about Senate Bill 1393 issues, please click on the following articles:
Contact us.
Serving Torrance, Long Beach, Compton, Airport Courthouses and Other Courthouses.