Our client, age 39, and his girlfriend, age 44, got into an argument in their Redondo Beach apartment on the Esplanade.  Both were extremely drunk.  Our client was almost six feet tall and about 250 pounds.  His girlfriend was about five feet, six inches tall and about 175 pounds.
As is common, the argument became physical and our client began pushing his girlfriend, eventually kicking her, and she fell down in the apartment.  He then got on top of her and bit her ear lobe so hard that photographs taken after by police show it was severed completely, except for about a quarter-inch area of skin left intact.  An area about a quarter inch along the lobe bitten through and bled profusely.
When this took place, our client’s girlfriend called the police and told the 911 dispatcher that her boyfriend had kicked her and bitten her on her ear.  The Redondo Beach police department was dispatched to the scene.
When police arrived, our client had left the scene and police only found the client’s girlfriend still at the apartment.
When asked again about her injuries, she said she did not know how the injuries took place, saying “we were both drunk.” 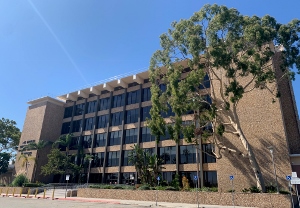 Torrance Courthouse
The change of the story by our client’s girlfriend was significant.  The injury to the ear was not something that would have happened by her just falling down from being kicked or pushed.
The girlfriend refused medical attention and police left the scene.
Several weeks later, police found our client, admittedly high on oxycodone, Percocet and Xanax, wandering around the Burnt Tortilla parking lot in Redondo Beach.  When police approached him, he ran toward the corner of the parking lot, put police caught him.  When asked why he ran, he explained that he thought he was in a police impound lot looking for his car, which had been towed.  This made little sense, so police arrested him on charges of being under the influence of a controlled substance, only to later find out he was the suspect in the domestic violence case from several weeks earlier.
The client appeared for his domestic violence case in court and at first, opted for the public defender’s services.  Due to the injuries to his girlfriend, the initial plea bargain included 90 days in county jail, followed by 36 months of informal probation, 52 batterers’ program classes, a $500 domestic violence fund contribution and $220 in court fines and fees.
This rough offer caused the client to retain Greg Hill & Associates.  Greg then appeared in the Torrance court, relieving the public defender as our client’s counsel.  The Redondo Beach City Prosecutor explained that she thought the case was a felony, but the Torrance District Attorney’s case had passed on handling it because of the recanting girlfriend, meaning the case was left to the Redondo Beach City Prosecutor’s office to handle.
The Redondo Beach City Prosecutor explained her 90 days of county jail requirement as based on the severity of the injuries, as the photograph of the ear showed a severe cut to the ear lobe and the girlfriend also had bruises to her knees where she fell down after being kicked by our client.  Moreover, our client had seven prior convictions for misdemeanors and many arrests for felonies, all of which were not filed.  The Redondo Beach City Prosecutor stated she thought he needed a bit of time in county jail to “wake him up.”
The prior convictions ranged from misdemeanor obstructing or delaying a police officer (Penal Code § 148(a)(1)) in Torrance, misdemeanor animal cruelty (Penal Code § 597(b)) in Torrance, misdemeanor under the influence of PCP, a controlled substance (Health & Safety Code § 11550(a)) in Torrance, misdemeanor possession of marijuana (Health & Safety Code § 11377(a)) before Prop 64 in San Bernardino, and several felony cases reduced to misdemeanors, including for felony grand theft and forgery, all in Torrance.
Greg explained the offer to our client and encouraged him to enroll in an approved batterer’s program and to show proof of employment.  He did so and eventually, over many appearances, the county jail term of the offer was reduced to 20 days of Cal-Trans, which the client was very happy with, as he feared going to jail and being fired from his job.
He was very happy he had decided to retain Greg Hill & Associates to defend him and negotiate a far better plea bargain for him.
For more information about domestic violence, please click on the following articles:
Contact us.
Serving Torrance, Long Beach, Compton, Airport Courthouses and Other Courthouses.