Our client and his wife had an argument involving his drinking and the wife’s sister, who always seemed to hang out at the couple’s home and try to give unsolicited marital advice.  The argument reached the point that the wife decided to simply take a walk to cool down.  Our client was drinking quite a bit at the time.

As the wife reached for the door to leave, our client grabbed his wife’s arm to prevent her from opening the door.  The wife became very upset that her husband would try to control her, so she quickly called the Redondo Beach Police, who she knew would arrest our client for felony domestic violence (Penal Code § 273.5).  Her call caused the exact result she expected.  The wife, however, had a significant and visible bruise to her upper arm, but nothing more.

Summary:  Redondo Beach, client grabs his wife’s arm as she is trying to leave to take a walk to get a break in an argument the two were having, client arrested, bail reduced and felony domestic violence case negotiated to misdemeanor battery (Penal Code § 242) only.

The Redondo Beach Police had responded to the home in the past for one incident allegedly involving domestic violence, but no charges were filed in that case, which was about six weeks earlier.  Such evidence of a prior uncharged act is potentially admissible under Evidence Code § 1109 as a prior bad act to show propensity and capacity to act similarly later.

On this case, however, the Redondo Beach Police set bail at $50,000, which is the level for felony domestic violence.  Our client was unable to afford a bond for to secure his release.  While in jail, our client then suffered a seizure likely due to alcohol withdrawal and spent several days in a coma, prompting his being taken to a hospital.

At the arraignment two days later, we then filed a written motion to reduce bail, which the Court granted.  The bail was reduced from $50,000 to $20,000, which financially allowed our client to post the bail bond to be released from jail.  This was quite a welcome break for our client, as he needed to get to work. 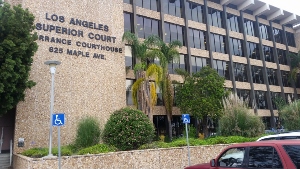 Torrance Superior Courthouse
At the first pre-trial conference, with the client’s wife present, Greg Hill from our office negotiated with the Redondo Beach City Prosecutor for several hours, eventually persuading her to amend the complaint to simple battery (Penal Code § 242), as mutual combat was involved (according to the police report) and the client’s wife recanted her story she told to the police.

Our client was happy to accept the plea bargain, as his employment would be imperiled with a domestic violence charge, but less endangered with a straight battery charge.  The plea terms involved a $400 contribution to a victims of domestic violence fund (mandatory under California (this rose to $500 in 2014)) and 52 weeks of a court approved “batterer’s program” required in all cases of spousal abuse.

The booking fee, as well as all fines and community service (eight hours is mandated under the Penal Code, but often not imposed), were waived by virtue of our client’s 17 days in custody.

The case was resolved at the first pre-trial conference and Greg Hill & Associates returned a significant amount of the retainer to the client, since the case resolved so quickly.  There were only two appearances in court, which is far less than usual.  Moreover, the client agreed to make all progress hearing appearances on his own.

For more information about the difference between a felony and a misdemeanor, bail and domestic violence in general, click on the following articles:
Watch our Video about Domestic Violence by clicking here.