Home
Other Information
Criminal Defense Articles
How Do I Get Bail Reduced? What Factors Are Considered?

How Do I Get Bail Reduced? What Factors Are Considered?

There are few things that surpass the sense of urgency in the voice of a wife whose husband is held on bail that she cannot afford. The husband may be the sole financial provider for the family and the wife rightfully panics when bail is set too high. The husband may be in danger of losing his job if he is not freed on bail or his own recognizance immediately.

In a Nutshell:  The amount of bail set for a particular defendant is based on the offense being charged, the defendant's criminal history and the likelihood of defendant appearing in court, in light of the recent 2018 case In re Humphrey, which directed judges to consider alternative methods than just bail for ensuring public safety, i.e. GPS tracking devices, classes and drug/alcohol abuse meetings.

The way to have bail addressed by a judge is to request a bail hearing under Penal Code § 1275. When this is sought at the arraignment, which is most common, there is supposed to be two-day notice period. Penal Code § 1270.1(b). However, since most arraignments are within two days of the arrest (Penal Code § 825 requires this), an attorney must give notice immediately. In our experience, however, we have found prosecutors and judges generally excuse this notice requirement except in strike charges and domestic violence matters. 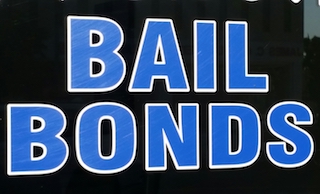 Bail Bonds Sign
Bail is available for those accused of most charges. It is not available for someone taken in on first degree murder, for example, or when someone indicates he or she will flee if released. It is also not available when the person is taken into custody on a warrant, a probation violations or a parole violation.

Bail is usually set first according to a county bail schedule. Most such schedules are available online with a quick Google search. It is a guideline for police to permit an arrestee to post before the prisoner's case is in front of a judge. Such a use of a bail schedule is authorized in Government Code § 72301 (bail accepted by clerk) and Penal Code § 1269b (bail accepted by custodial officer). Once the person is in front of a judge, bail can be reduced or even increased based on the individual circumstances of the defendant. Stack v. Boyle (1951) 342 U.S. 1, 5.

To reduce bail, as we are often asked to do, it is important to know the purpose of bail. "The right to release before trial is conditioned upon the accused's giving adequate assurance that he will stand trial and submit to sentence after if found guilty". Ex parte Milburn, 9 Pet. 704, 710 (1835). Like the ancient practice of securing the oaths of responsible persons to stand as sureties for the accused, the modern practice of requiring a bail bond or the deposit of a sum of money subject to forfeiture serves as additional assurance of the presence of an accused.

However, bail set at a figure higher than an amount reasonably calculated to fulfill this purpose is "excessive" under the Eighth Amendment. See United States v. Motlow, 10 F.2d 657 (1926, opinion by Mr. Justice Butler as Circuit Justice of the Seventh Circuit). Since the function of bail is limited, before "the fixing" of bail for any individual defendant must be based upon standards relevant to the purpose of assuring the presence of that defendant." That is, the sole criterion should be the likelihood of appearance. Van Etta v. Scott (1980) 27 Ca1.3d 424, 438, citing Underwood; In re Samano (1995) 31 Ca1.App.4th 984, 992. [seriousness and crime record might impact flight risk, if properly articulated and proven, but they cannot survive as their own distinct criteria].

Under California law at Penal Code § 1275, public safety is also an objective of setting bail. However, as Michael Kennedy, a noted constitutional scholar, has aptly pointed out, public safety can only really be assured by denying bail. This ironically means public safety is really only a practical criteria if bail is denied.

Nevertheless, “public safety” is the “primary consideration” in setting bail under 1275. In evaluating this, the judge is supposed to evaluate the seriousness of the crime, the record of the accused and the probability of his voluntarily appearing in court again if released. In our opinion, this is an ambiguous, speculative analysis that is largely form over substance.

To address the likelihood of our client appearing again in court, we like to stress the employment status of the client, his or her family ties to the community, whether or not the client even owns a passport (and if so, will he or she tender it to the court as a gesture of good faith), his or her age and, of course, the client’s record of appearing in court in the past if the person has a criminal history. We often request that family members come to court to demonstrate to the judge that our client has local ties.

When the victim or victims live nearby, we often propose a protective order to assure the safety of the victim(s).

For more information about bail issues, click on the following articles: