Home
Other Information
Criminal Defense Articles
How Is Bail Set? What Factors Are Considered in Its Amount?

How Is Bail Set? What Factors Are Considered in Its Amount?

It is easiest to think of bail as money one must give to the court in order to leave jail.  The money is used as collateral to ensure one appears as ordered in court.  If one does not appear, the court keeps the money.

What One Should Learn from This Article:  Bail is set by the severity of the crimes or crimes charged, as well as one’s criminal history.  It can be increased on decreased by a judge upon a more individualized evaluation of the person’s likelihood of returning to court and public safety danger.

One can also deposit the full amount of bail with the court in cash (or via a cashier’s check, traveler’s check or personal check), although this is rarely done.  If this is done, the full sum is refunded to defendant at the end of the case if he misses no court appearances.  A refund is made sixty to ninety days after case is resolved, less any restitution and fines ordered paid.  Resolved is defined as the case ending in a plea bargain, the defendant being committed to custody (jail or prison), the defendant entering a PC1000 drug diversion program or the court declaring defendant incompetent to stand trial. 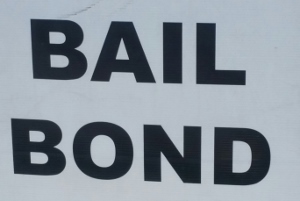 A third method of posting bail is through a property bond.  Under this method, the court is given a lien on your property for the bond amount.  If you fail to appear in court, you forfeit the bail and the court can institute foreclosure proceedings on the property to satisfy the lien.

The amount of bail required depends on the severity of the crime, as well as enhancements such as using a firearm during the alleged crime, having a prison prior within the last ten years and prior sex offenses when the crime at issue is another sex offense.  Bail also varies by county.  Each county in California has its own bail schedule for each type of offense.  For example, in 2012, felony domestic violence had a bail amount of $50,000 in Los Angeles and Orange County, but in Kern County, bail for the same offense was $25,000.  Every few years, a group of judges reviews the bail amounts for each crime and changes the amounts as they see fit.

Bail is initially set by the police, but a judge can review the amount set when requested by a defendant.  Bail, for example, cannot be so high that it has the practical effect of barring the release of a defendant, although this often is exactly what happens to many poor defendants.  Likewise, theoretically, bail should be increased from the bail schedule amounts when the defendant is quite wealthy and paying the bail amount does not guarantee his or her return to court.

A judge is guided in setting bail by considering the public’s safety if an individual is released on bail.  Defendant’s threats to a witness, for example, may be considered on this issue.  A judge should also consider the defendant’s ties to the community in, for example, the residences of his family, his employment situation, his involvement in the community (church, youth activities, clubs) and his ability to travel outside the country (i.e. does the defendant have a visa or passport).

If the prosecutor or judge believes that you posted bail by illegal means, you could be charged with a violation of Penal Code § 1275.1, itself a felony.  For example, one may consider bail a “business expense” and direct that bail be posted from bank robbery proceeds.  The suspicion of this is most commonly aroused when a defendant posts the full amount of bail in cash.

If one fails to appear in court, the court will issue a bench warrant for one’s arrest (Penal Code § 1305).