Our client, an attorney, was arrested after a neighbor summoned police when he heard our client and his wife arguing.  The two had a history of drinking large amounts of alcohol and arguing loudly.  This time, about midnight on a weeknight, the neighbors had reached the point of hearing too much.  They needed to sleep, so they called the Redondo Beach Police Department.

When Redondo Beach police arrived, they allegedly found our client's wife had bruising to the left side of her face and our client, age 43, “severely” intoxicated.  The two had both passed out in their living room on the large couch after arguing loud enough for the neighbors to call the police.

Our client and his wife were awakened and explained to the Redondo Beach Police officer that they had been arguing and she tripped over their dog's bed and hit the side of her face on the stairs nearby.  She showed the police the dog’s bed and demonstrated how her injury had been incurred.  Nevertheless, our client was arrested and charged with one count of Penal Code section 273.5, felony domestic violence. 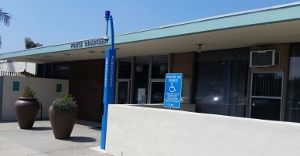 Redondo Beach Police Station
Greg Hill was called after our client was arrested and he immediately went to the Redondo Beach Jail to speak to our client.  It was now about 2:30 a.m. on a Thursday morning.

Greg was taken back to the rear of the jail, where he met with the client in a small room.  The client reeked of alcohol.  He was quite worried about what a felony charge or, worse yet, a felony conviction would mean for his license to practice law.

Greg listened to the client explain what had happened and, in turn, Greg explained how such cases often resolve in the Torrance courthouse.  He also explained who the prosecutor most likely would be if the case was filed as a felony and which Redondo Beach City prosecutors may work on the case if it was filed as a misdemeanor.

Greg was optimistic that since there was no witness to the incident except a neighbor who heard loud arguing, the prosecutor would rely heavily on the client’s wife, who denied any domestic violence took place.

After perhaps 45 minutes of talking with the client, Greg left the jail.

The same day, later that morning after the sun rose, Greg spoke with the wife.  The wife reiterated her explanation of events and volunteered to undergo a lie detector (polygraph) test to show she was telling the truth.  Greg responded that the results of such a test are not admissible, generally, in court, but that they can be used in plea bargain negotiations.

Instead, Greg arranged for a private investigator to speak with the wife and have her sign a declaration under oath about the events.

Nonetheless, the detective politely thanked Greg for the declaration.  Greg did not expect the declaration to help too much, if at all, as he had used the same technique in the past with little success.  However, it was the only and best thing one could do under the circumstances of this case.

This time, however, the case was never filed.  Greg’s efforts were successful, as the District Attorney agreed to not file the case against our client, or so it seemed.  The reality is our office will never really know whether what we did, if anything, had any influence.  Our just visiting the client in jail may have caused the police to look at the case more closely.  The client’s status as an attorney may have been a factor.  The declaration from the wife, provided less than two days after the arrest, may have had some effect.  We will never really know for sure.
For more information about the issues in this case summary, click on the following articles:
Watch our Video about Domestic Violence by clicking here.