Our client, age 37, was arrested by the Redondo Beach Police Department on suspicion of violating Penal Code § 243(e)(1).  The reporting party and the alleged victim was her alleged victim, who had trespassed into our client’s apartment and demanded to speak with her over what he believed was her cheating on him.
The victim was 50 years old and a music teacher.  He literally lived in the Old Torrance building he called his “studio,” on a couch next to drums and other musical equipment.  He had been living in the commercial space for years although he was not supposed to, according to the lease.
He managed to shower at our client’s Redondo Beach apartment and at the public showers along the beach.  She was his only hope for moving out of his music studio, as she was a paralegal at a large law firm in Century City and made decent money.
In confronting our client after he saw her talking and smiling with another man (he then took a picture of the two laughing together) at a Redondo Beach music festival, he was angry.  After demanding to know if his relationship with her was over, our client responded “our relationship? What relationship do you think we have?” 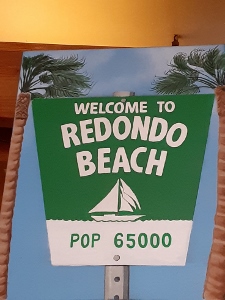 Redondo Beach Sign
He then began videotaping her with his cell phone, saying “just make it easy for me.  Hit me.  Come on, hit me.”  However, the video documented her repeated polite requests for him to leave her apartment, even her saying, “it is 1:00 a.m., please leave.  I need to sleep.”
The boyfriend then got closer to our client in her bedroom and the video seemed to document some fighting between the two and then the boyfriend returned to narrating the video, saying “see, how you have hit me.  I will call the police for help.  Thank you.”
The Redondo Beach Police did arrive and did arrest our client.  She was held on charges of violating Penal Code § 243(e)(1) and posted the $20,000 bail immediately.  She then went directly to Torrance Memorial for treatment and diagnosis of her head and neck pain, which the police ignored.  The doctor at Torrance Memorial wrote in his report that she had suffered “blunt head injury” and “cervical strain.”
Our client then took photographs of the bruising to her right cheek from her former boyfriend.
She then called Greg Hill & Associates and met with him on a Sunday afternoon.  Greg listened to her story and recommended she take a day off from work and get a civil restraining order against her former boyfriend.  The following day, in the Torrance Courthouse, she did just that.
The following day, a Monday, she obtained a restraining order against him
She hired a professional process server to properly serve her ex-boyfriend.  After he was served, literally 30 minutes later, he sent text messages to our client, vowing to “get even” (even though our client was the one arrested, not him).  In one of the texts, he oddly sent our client a photograph of our client with the other man from the music festival (that he photographed).  This contact, which the civil protective order prohibited, was a crime.  It was violation of a civil protective order.
Greg Hill then wrote the Redondo Beach City Prosecutor’s Office, enclosing our client’s medical records documenting “blunt head injury” and “cervical strain,” as well as the text message from the ex-boyfriend vowing to “get even” after our client had him served with the civil restraining order.  In Greg’s letter, which he delivered in person at the Redondo Beach City Prosecutor’s Office near the Redondo Police Station, Greg requested a no file or, at most, an office hearing to resolve the case.
Almost immediately after texting our client that he would “get even,” the ex-boyfriend then went to our client’s house, which was also prohibited by the judge in the TRO, and placed a white rose in her wall by her front door for her to see.  Our client took a photograph of this.
He admitted to this via text message later, protesting all along “but I love you,” etc.
Our client then had another male friend (homosexual, so not attracted to her) move in with her for protection and he discovered the ex-boyfriend knocking on the front door of our client’s apartment.
Our client’s homosexual friend went to the Redondo Beach Police Department and reported the violation of the protective order.
Greg then sent the Redondo Beach City Prosecutor’s Office a copy of the police report with the photograph of the white rose found at her house, again requesting a no-file, or at most, an office hearing.
After this, the ex-boyfriend stayed away from our client for about a week.  After a week, he again placed a white rose in the door handle of her car for her to see.  The rose stem was cut in the same length as the ex-boyfriend had done in dozens of other “rose placements” as was his custom with our client when they were boyfriend-girlfriend.
Greg then sent the Redondo Beach Prosecutor a third letter, explaining how the ex-boyfriend had now violated the TRO four times in one month and again requesting a no file or an office hearing.
The Redondo Beach City Prosecutor then responded, agreeing not to file any case against our client.  Our client was very happy with the proactive and persistent, but respective, approach Greg took.
For more information about domestic violence, please click on the following articles:
Contact us.
Serving Torrance, Long Beach, Compton, Airport Courthouses and Other Courthouses.