There is always confusion in Los Angeles County when one receives a red-light camera ticket.  After all, in 2012, the media celebrated then City Attorney Carmen Trutanich’s decision not to enforce any red light camera ticket issued within the City of Los Angeles.  Yet what tickets qualify for this exclusion and how does one invoke Mr. Trutanich’s position to bar judgment on such a ticket?  What if the ticket was not issued in the City of Los Angeles?

In 2009, before Mr. Trutanich changed his office policy, the City of Inglewood sent a citation to Carmen Goldsmith.  It used its automated traffic enforcement system (ATES) to obtain three photographs of Goldsmith, as well as a twelve second video of her crossing the intersection of Centinela Avenue and Beach Avenue.
Goldsmith went to the Inglewood Superior Court in response to the notice to appear issued to her.  She demanded trial and lost when Dean Young, an investigator with the Inglewood Police Department, testified.  Young was assigned to the traffic division in red light camera enforcement and had been so assigned for six years. 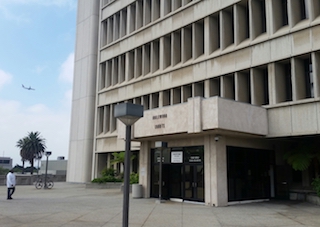 Inglewood Courthouse
Young testified that the Inglewood ATES was operated by the Inglewood Police Department, but maintained by Redflex Traffic System, Inc.  Young explained that each photo had a “Date Bar” that showed the date, time, location and how long the traffic light had already been red at the location when the photo was taken.  The Data Bar was on each photograph of Defendant’s car, one while the light had been red .27 seconds before Defendant entered the intersection.  A second photograph showed her car in the intersection 0.66 seconds after the light had already turned red.  The video also showed her car going through the intersection and measured her speed at 53 miles per hour.
Young also testified that on February 16, 2009, he conducted a timing check on the light and found the yellow phase to be four seconds, as well as on March 16, 2009.  Defendant’s ticket was issued on March 13, 2009.  These times were above the 3.9 second minimum yellow phase for a yellow light in a 40 mile per hour zone.
Based on this evidence, the trial judge found Defendant guilty and imposed a fine of $435.
Ms. Goldsmith appealed the conviction, first to the appellate division, where she lost, and then all the way up to the California Supreme Court.
Goldsmith argued that the trial court erred in admitting the ATES evidence because the prosecution failed to provide the necessary foundation to authenticate it and because such evidence was hearsay.
The California Supreme Court began its analysis by noting that in reviewing a challenge to the admissibility of evidence, it had to apply an abuse of discretion standard.  In other words, the California Supreme Court’s job was to evaluate if the Inglewood Superior Court judge abused his or her discretion in admitting the video and three photographs into evidence based on Dean Young’s testimony about what the photographs and video showed.
The California Supreme Court further noted that it would not reverse the trial court’s rulings unless it found that the trial judge acted in “an arbitrary, capricious or patently absurd manner that resulted in a manifest miscarriage of justice.” People v. Rodriguez (1999) 20 Cal. 4th 1, 9-10.
The California Supreme Court then looked to see if Mr. Young properly authenticated the evidence.  The fundamental issue was whether the evidence is relevant to the case by establishing that the writing is related to the case by establishing that the writing is authentic, for example by showing the maker of the evidence signed it.  Such authentication establishes that the writing is genuine and, consequently, reliable.  If something is reliable, the court can consider it in ruling.
A photograph or video is authenticated by showing it is a fair and accurate representation of the scene depicted.  Evidence Code § 1553 provides that there is a presumption of authenticity in photographs and video as long as some foundation is supplied.  Here that foundation was provided by Young, who testified us to how the cameras worked and what the Data Strip showed, recorded and what information was supplied for it.  Evidence Code § 1552 provides a similar presumption for computer information.
Both presumptions are rebuttable.  However, in Goldsmith’s case, she offered no evidence to rebut the presumptions, so such presumptions about authenticity did apply.  The California Supreme Court thus found no abuse of discretion.
As to the argument that the photographs and video were hearsay, the California Supreme Court quickly dispatched of this argument by pointing out that hearsay is defined as a statement of a natural person.  Photographs and a video are not statements of a person and thus, are not subject to cross examination.  Thus, they do not constitute hearsay at all.
Consequently, the trial court’s ruling was affirmed.
The citation for the California Supreme Court ruling discussed above is People v. Carmen Goldsmith (2014) 59 Cal.4th 258, 172 Cal. Rptr. 3d 637, 326 P.3d 239.
For more information about red light camera tickets, click on the following articles:
Contact Greg Hill & Associates
Serving Torrance, Long Beach, Compton, Airport Courthouses and Other Courthouses.