Our client, age 24, had just stepped outside the Anarchy Library, a popular bar on Woodruff Avenue in Downey.  It was about 1:00 a.m.  He was headed back to his car to drive home.  He was heading home early because he had to be at work at an import/export warehouse by 8:30 a.m. and he needed to get home to sleep a few hours. 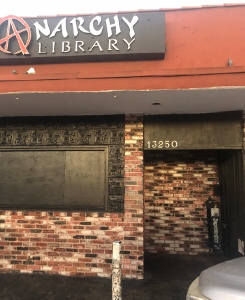 Anarchy Library Bar in Downey
Right after he walked a few yards, he felt the urge to urinate.  He did not want to go back inside the bar, so he decided to just urinate in a dark area, against a wall.
Just as he started to do so, a police officer drove by and literally observed our client “in the act.”  The police officer was rather nonchalant about it, coming to a stop without yelling at our client to stop.  The police officer apparently knew that our client could hear the sound of his car just feet away and the chatter from the police dispatch through the cop’s open window.
Our client finished his business and turned around to see the Downy Police car about ten feet away.  The officer then put the car in park and got out of his car.
He walked over to our client, who was expecting to be lectured or quickly handcuffed.  Instead, the officer asked him if he knew urinating in public was illegal.  Our client said he knew this was so.  The officer said nothing else except to ask for our client’s driver’s license, which our client produced.
The officer then calmly filled out a yellow ticket for violation of Downey Municipal Code § 4115, urinating in public.  The officer circled the offense as a misdemeanor on the ticket.  He then asked our client to sign on the ticket, which our client did.  The officer then tore the ticket off his pad and handed it to the client.  No more words were spoken by the officer as he returned to his police car and drove away.
Our client returned home and went to sleep, not realizing that the ticket was a bit more significant than a parking ticket.
Two days later, he looked at the ticket again, realizing he was cited for a misdemeanor.  He had no prior criminal history, but he knew a DUI was a misdemeanor.  So, he suspected a ticket for public urination was not just like a parking ticket that one can pay online.  He looked again at the ticket and realized he had an arraignment date in the Downey Superior Court.
Like many, he got on the Internet and did some quick research of what Downey Municipal Code section 4115 was all about.  He learned that it was punishable by up to six months in county jail and a $1,000 fine.   In the same searches on the Internet, he saw the advertisements of several lawyers, so he sensed speaking to an attorney might be wise.
The client called Greg Hill & Associates and spoke to Greg Hill.  Greg asked the client about the facts of the case.  Greg then explained his experience in handling such tickets at the Downey Superior Court.  Greg also explained how he was often able to reduce the charge to an infraction, which was better than a misdemeanor because there is no probation associated with an infraction and because many employers are not concerned about infractions, but are concerned about misdemeanors.
Greg recommended that the client attend ten Alcoholics Anonymous (AA) meetings prior to the arraignment and to give Greg the sign-in sheet showing such attendance prior to the arraignment.  Greg would then take the sign-in sheet to court to show the Downey City Attorney and request that the charge be amended to be an infraction and have the misdemeanor dismissed.
The client then retained Greg Hill & Associates and attended ten AA meetings as Greg recommended.  He gave Greg the AA sign-in sheet and Greg then took it with his to the Downey Superior Court on the day of the arraignment.  The client remained at work.  He did not go to court with Greg.
Greg indeed was able to negotiate with the Downey City Attorney to have the charge amended to be an infraction and the misdemeanor dismissed.  The terms of the conviction were only a $50 fine, plus penalties and assessments (total of about $315).
The client was extremely grateful to avoid a misdemeanor and the consequences that this could have had for his job and future.  He was very thankful to Greg after Greg shared the news of what took place at the arraignment.
For more information about public urination issues, please click on the following articles:
Contact us.
Serving Torrance, Long Beach, Compton, Airport Courthouses and Other Courthouses.