Most public urination cases are rather uncomplicated.  Most involve people who are U.S. citizens, so the risk of a misdemeanor conviction involves being on informal or summary probation and the consequences that may have on their employment.  Most also involve people with no prior criminal history because if they had any prior criminal history, they are far more careful about committing any further crime.
The following case involved our client, age 28, had more at stake.  Our client was not a U.S. citizen, so a conviction for a misdemeanor such as public urination could have immigration consequences because it would be his second such conviction, as he had a prior conviction for DUI just five years prior.
Generally speaking, it was understood that if a non-citizen suffered one misdemeanor conviction, even if it involved a crime of moral turpitude (i.e. theft), deportation proceedings usually did not commence.  However, if he had two convictions for misdemeanors, our client believed he was at risk for deportation.  So this seemingly minor ticket for a misdemeanor violation of Downey Municipal Code section § 4115 was a major concern for him.  He did not want to return to Mexico, as he has started a new life here in the United States.
The underlying crime was much like many other public urination cases in Downey.  Our client had been at Joseph’s Bar & Grill for a few drinks one evening with friends.  After the evening ended, our client was walking along 3rd Street back to his car nearby.  He felt the urge to urinate, so he decided to simply find a wall nearby and urinate.
As his luck would have it, a police officer in a marked Downey Police vehicle was driving down 3rd Street at the same time, in the same block.  The officer in the car claimed to clearly see our client urinating on the wall, just about 50 feet from Joseph’s Bar & Grill.  He pulled his car to the curb and stopped, while our client continued urinating. 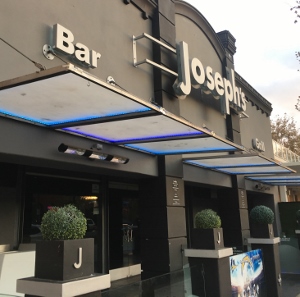 Joseph's Bar & Grill in Downey
When our client finished and buttoned up his pants, he turned away from the wall and back to face a Downey Police Officer asking him to walk over to his police car to have a seat.  Our client did so, as the officer asked for our client’s driver’s license.
The officer wrote out a ticket for misdemeanor public urination, a violation of Downey Municipal Code § 4115.  He handed it to our client and asked him to sign a promise to appear in the Downey Superior Court in about six weeks.  Our client signed the promise to appear and the officer drove away.
The same day, but perhaps twelve hours later, the client called Greg Hill & Associates.  He spoke with Greg, first describing the facts of this case and then his immigration concerns and how being on probation, even if informal (summary) probation, would mean he would lose his job.
Greg explained how such cases were generally handled at the Downey Superior Court and recommended that the client attend at least ten Alcoholics Anonymous (AA) meetings prior to the arraignment so Greg could request that the Downey City Attorney amend the complaint to allege an infraction-level violation of the section 4115 and dismiss the misdemeanor allegation.  Since there is no probation after a conviction for an infraction, this would help our client’s employment concerns.
As to the immigration consequences of a second misdemeanor conviction or even a conviction for a non-traffic infraction, Greg recommended that the client speak to an experienced immigration attorney to confirm that a plea to an infraction such as 4115 would not result in deportation proceedings.
The client retained Greg Hill & Associates and attended ten AA meetings prior to the arraignment.  He gave Greg a photocopy of his AA sign-in sheet to take with him to the arraignment at the Downey courthouse.  The client also spoke with an immigration attorney who told him a plea to an infraction for public urination would not trigger deportation proceedings, even with his prior DUI conviction from five years earlier.
Greg then appeared at the Downey Superior Court on the client’s behalf for the arraignment.  The client stayed at work on this day.  Greg got the police report and discussed the case with the Downey City Attorney, showing him the client’s AA sign-in sheet.  The Downey City Attorney was impressed with our client attending ten AA meetings as a result of the citation for public urination.  Greg then asked for the City Attorney to consider amending the complaint to allege an infraction-level violation of 4115 and dismissing the misdemeanor allegation.
The Downey City Attorney agreed to do so, saying the resolution would require the client’s payment of just a $50 fine, plus penalties and assessments, or about $450.  Greg accepted such terms and the case was resolved as an infraction.  The misdemeanor charge was dismissed.
The client was very happy with this resolution of his case, as it avoided any negative employment consequences and did not cause any immigration problems.
For more information about the issues in this case, please click on the following articles:
Contact us.