Our client, then 35, was in town from Massachusetts to visit an old friend living in Hermosa Beach.  His friend raved about the downtown Pier Plaza area and how there was nothing else in the world so great, so our client agreed to go there with his friend.
The evening was a lot of fun.  They had enjoyed watching an NFL playoffs game involving the New England Patriots and had a few beers while watching the game.
At some point, the two friends got separated.  Our client tried calling and texting his friend on his cell phone, but this was not successful in reaching his friend.  Finally, our client decided to just walk back to his friend’s home.  He thought it could not be too hard.
He walked south along Hermosa Avenue and came upon the house that he believed his friend lived in.  He walked up to the front door and walked into the house.  The front door was unlocked.  Our client turned on the lights in the family room and sat down in a chair there, just to relax a bit.
A strange woman then walked into the family room and asked our client, “what are you doing in our house?”  Our client realized he was in the wrong house and quickly apologized and scurried out the front door, apologizing profusely. 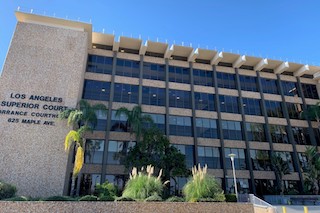 Torrance Courthouse
The woman did not think the apology resolved the situation, so she called the Hermosa Beach Police Department, who found our client rather quickly and arrested him for public intoxication, Penal Code § 647(f).  The client then spent the night in the Hermosa Beach City jail and was released in the morning.
The client returned to Massachusetts and then called Greg Hill & Associates.  He spoke with Greg and described what had happened to him.  Greg explained what he would attempt to do to resolve the case for a crime other than pubic intoxication because our client had a prior DUI and a second alcohol-related conviction might be very compromising for our client’s employment.
The client was the Chief Financial Officer and Chief Operations Officer of a school district in Massachusetts.  The Superintendent had announced his intention to retire and this meant our client would be one of the candidates to step into the superintendent position, a position he though would never open up.
Greg did resolve the case as he promised, for trespassing (Penal Code § 602(m)), rather than public intoxication.  In fact, the public intoxication charge was dismissed and our client was placed on two years of informal, or summary, probation, with an obligation to pay the $358 City of Hermosa Beach booking fee, $220 in court fees, attend twenty Alcoholics Anonymous (AA) meetings and stay away from the home he mistakenly entered on Hermosa Avenue.
Over the next year, it became increasingly clear that our client was the front-runner for the superintendent job, but he knew that if a background check was performed on him, it would show that he was on informal probation for the Torrance case arising out of Hermosa Beach and he would not be chosen for the position.
Being on probation had other problems, too.  He could not travel to Canada to enjoy a family vacation with his extended family and his three kids could not understand why.  He also was unable to coach his son’s football team, something he had done in earlier years.
So, when Greg Hill emailed the client, as is his custom at the half-way in probation to inquire if the client was interested in requesting early termination of probation and expungement, the client was very happy to retain Greg Hill & Associates again for this motion and the petition for dismissal (expungement).
Greg Hill & Associates then prepared the motion for modification of probation so as to end it early and the judge in Torrance Superior Court granted it “due to the unique circumstances.”  The Redondo Beach City Prosecutor, who normally opposes such motions, did not oppose this motion.
Greg Hill & Associates then filed the petition for dismissal under Penal Code § 1203.4 to expunge the conviction.  This was also granted, changing the last plea back to not guilty and showing the case dismissed.  The client was extremely happy with this change in his status.
For more information about early termination of probation and expungement issues, please click on the following articles:
Contact us.
Serving Torrance, Long Beach, Compton, Airport Courthouses and Other Courthouses.