Our client, age 34, was at karaoke night at Poncho’s in Manhattan Beach.  He had consumed quite a few beers and margaritas.  He was feeling the full effect of the alcohol.  He had apparently gone to karaoke night alone, without any friend there to enjoy the evening with.
According to several females, who complained to the bar manager, he was touching their behinds and pretending that it was not him doing so, but it was quite obvious what he was doing.  The manager called the Manhattan Beach Police Department, who arrived at the scene just as our client was climbing into a Yellow Cab to be driven home.  It was 1:20 a.m. on an early Sunday morning.
Police pulled him out of the Yellow Cab and transferred him to their police car without asking any questions.  While in the police car, they noticed the odor of alcohol and asked him what he had been doing in Poncho’s.  Our client denied the suggestion that he had been touching several females inappropriately.
Our client then spent the evening in the Manhattan Beach Police Department jail to “dry out.” 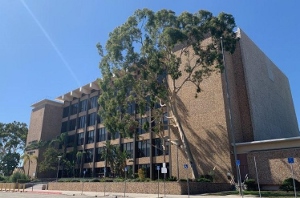 Torrance Courthouse
Upon being released the following morning, he immediately called Greg Hill & Associates and spoke to Greg.  The client explained that he was arrested for public intoxication (Penal Code § 647(f)) and had signed a promise to appear in the Torrance Superior Court in about six weeks.  He said that police told him several women reported he was touching them inappropriately and he vehemently denied doing so.
The client told Greg that he had no prior record and was a licensed insurance salesman with multiple professional designations.  He further explained that he was in charge of training other insurance salesmen.
The client also explained that he was married and had two young boys who were starting AYSO soccer and youth baseball, so he desperately wanted to avoid a conviction that might imperil his insurance salesman license and his ability to pass background checks to coach AYSO soccer and youth baseball.
Greg explained how public intoxication cases are generally handled for the City of Manhattan Beach in the Torrance Courthouse, but that this case may be handled with more punishment because of the report of his inappropriate touching.
Greg also explained how it would be critical to see how the police report describes what happened, as that will be carefully scrutinized by the District Attorney in Torrance.  Greg cautioned the client that just because the police cited him out for only public intoxication, it was not uncommon for the District Attorney to charge him with more, i.e. sexual battery (Penal Code § 243.4), if the police report supported such an allegation.  Greg explained that while sexual battery can be a misdemeanor (or a felony), there is a requirement that the client register as a sex offender under Penal Code § 290 for life, although this time period will lower to ten years as of January 1, 2022.
Greg recommended that the client attend twenty Alcoholics Anonymous (AA) meetings before the arraignment, which the client quickly did, and give Greg the AA sign-in sheet to take to the arraignment to help start plea bargaining in the right direction.
Greg then appeared at the arraignment to find that the complaint only alleged public intoxication, which was a big relief.  However, the client did have a prior conviction for misdemeanor vandalism (Penal Code § 594) and public intoxication, so that was quite a surprise because the client told Greg he had no prior convictions.
Greg then discussed the case facts with the prosecutor, who agreed to resolve the case for one year of informal probation, 20 AA’s (which our client already did), court fees of $220 (a $150 restitution fund fine, a $30 criminal conviction fee and a $40 court security fee), a $250 City of Manhattan Beach booking fee and a stay away order from Poncho’s.
This was a very good resolution, given the police report did describe our client’s alleged inappropriate touching and our client’s prior criminal history.  The client was very happy with this resolution.
At the six-month mark in probation, our office contacted the client to see if he was interested in early termination of probation and expungement, but the client did not respond to Greg’s email suggesting early termination of probation.
At the one-year mark from the conviction, our client contacted us, eager to have the conviction expunged due to its effect on his professional license and so he could coach his sons’ AYSO teams.  Our office then filed the appropriate petition, with a declaration from our client.
The judge in Torrance granted the petition for dismissal under Penal Code § 1203.4 (“expungement”), closing this chapter in our client’s life.
For more information about public intoxication and the issues in this summary, please click on the following articles:
Contact us.
Serving Torrance, Long Beach, Compton, Airport Courthouses and Other Courthouses.