Our client was driving north on Western Avenue, just past Santa Monica Boulevard.  It is an area police are familiar with as popular for prostitutes to work, but off and on.  After all, there have been dozens of arrests for solicitation of prostitution, both of johns using police stings, and of prostitutes.
Our client was unaware of the area’s reputation and how police were often monitoring the area.  All he saw was a woman wearing high heels, a short black mini-skirt that accentuated her slim figure, a tight purple stretch top and large hoop earrings.  The woman was Hispanic and waived to him as he drove by.  It was about 7:30 p.m., but still light out as it was early summer.
Our client, all of 23 years old and recently graduated from college with a bachelor’s degree in social services, but still living at home because he could not yet find employment, turned around and drove back to talk to the woman.  He was curious whether she was a prostitute or a police officer.
When he re-approached the woman, she came over to his car and once she spoke to him, he realized she was not a police officer.  Her teeth were in urgent need of braces and her English was poor.  He knew she could not be a police officer. 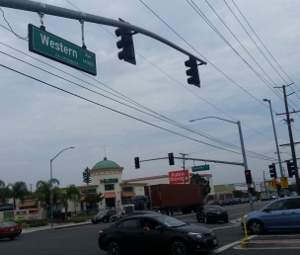 He then spoke to her about a “date” and she agreed, asking for $60 for “everything.”  Our client agreed and then two then discussed a hotel a few blocks up Western on the east side of the road.  The prostitute then opened our client’s car door and sat in the passenger seat.
Our client told us he then drove no more than one block before he saw flashing blue and pink lights in his rear-view mirror and a police officer on a public address system instructed him to pull over.  The police suburban was a marked black and white painted car.
When our client pulled over on the next side street, the woman ran from the car once his car came to a stop.  She was cussing in Spanish and our client was in English as well.
The police officer came over the driver’s side of the car before our client could even reach down to get his wallet, vehicle registration and insurance card.  The officer opened up the car door and pulled our client out of the car before our client could even unfasten his seat belt.  The officer was extremely angry, our client said.  Once our client could release the seatbelt latch, he was pulled out of the car and forced to lay on the street, face down.
Our confused client admitted nothing to the police officer, explaining however, that he was just giving the woman a ride up the street.  He denied having any agreement to pay the woman for sex.
He was nonetheless issued a citation for solicitation of prostitution and was asked to sign a promise to appear in the Los Angeles Superior Court at 210 West Temple Street in downtown Los Angeles.  The first court appearance was about eight weeks later.  Police then took our client’s photograph and repeatedly asked him to admit he was trying to pick up a prostitute.
The client called our office the very next day and explained his situation.  He was extremely worried about the effect of a conviction for solicitation on his degree in social services and his future employment.
Greg Hill explained how such cases are typically handled and how he would immediately write a letter to the LAPD and the Los Angeles City Attorney’s office, explaining our client admitted nothing about any agreement to pay the woman in his car money for sex.  Greg then drafted this letter and mailed it to both offices.  Greg also included our client’s diploma and his college transcript for consideration by each office.  Greg demanded that no case be filed because there was no agreement to commit prostitution.
There was no response from either the LAPD or the City Attorney’s office, but no case was filed.  Greg was advised that the case was a DA reject.  When Greg described what had happened in court, the client was so happy that he offered to give Greg a $5,000 bonus for “saving my future.”  Greg declined such a bonus, although he appreciated the client’s thankfulness.
For more information about prostitution and no-file issues, please click on the following articles:
Contact us.
Serving Torrance, Long Beach, Compton, Airport Courthouses and Other Courthouses.