Our client, age 31, was returning home from work and decided to take a different route home.  It was just after 5:00 p.m. and late September, so it was still light out.  The sun would not set for another two and half hours.  The client did not feel like going home yet.

In a Nutshell:  Client arrested along Western Avenue in Hollywood area in a police sting after he goes to a hotel where a decoy was standing outside.  Case filed in downtown Los Angeles court (the Clara Shortridge Foltz courthouse) dismissed through judicial diversion after client attends a prostitution diversion program (PDP).

She was standing alongside the street, as if waiting for someone to pick her up.

Our client was a former Marine, having served in the supply corps and had two combat tours in Afghanistan to his credit.  He had no prior criminal history.

He slowed down alongside the woman (who he’d later find out was a police decoy) and said, “How are you doing?”  She said she was doing fine.

Our client then asked, “Do you give massages?” and the decoy answered “No.”  Our client then said, “Well, you look great” and left, continuing his drive northbound on Western.  But he kept thinking about the woman and how good she looked.

Ten minutes later, he returned and parked in the hotel where the decoy was standing nearby.  The decoy noticed him parking and walked over to his car.  When she walked up, our client said to her, “I’m here for full service.”

The decoy responded that this would cost him $60.

Our client agreed and was told to meet her upstairs in the hotel, at room 221.  He nodded his head to acknowledge he understood her instructions.

However, before he could even leave his car to walk up to the second story, he was arrested by the Los Angeles Police Department while he was still waiting in his car.  He was shocked and confused.  He was taken by the police into a different room, photographed and released about thirty minutes later with a promise to appear in the downtown Los Angeles courthouse (Clara Shortridge Foltz) for his arraignment. 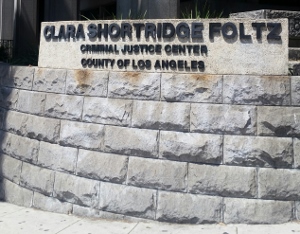 Clara Shortridge Foltz Superior Courthouse in Downtown Los Angeles
He went home, still in shock and combed the Internet to find out what he really faced.  He read on some websites (from other states, but our client did not notice) that he may have to register as a sex offender.  He read on other websites that he might face up to a year in county jail.

He called Greg Hill & Associates about a week later, after the shock seemed to dissipate.  He spoke to Greg Hill and explained the facts of the case.  Greg explained that based on the facts, it would be very unlikely that the client would have to register as a sex offender or serve any time in custody.  Greg then explained that since the client most likely would be given an opportunity to earn a dismissal through judicial diversion.

Greg then appeared at the arraignment and spoke to the handling Los Angles City Attorney.  Greg and her discussed the police report and what would be appropriate to resolve the case.  The City Attorney then suggested that the client enter into judicial diversion, the terms of which would most likely be those recommended to the judge by her.  This would be that the client attend the one day, eight-hour Prostitution Diversion Program (PDP) and submit to an HIV test.  He would then need to stay away from the area of Western and 41st Street for a year and stay out of all trouble for a year.

The client agreed to this and entered a no contest plea to violating Penal Code § 647(b), but because this was judicial diversion, no judgement was entered against him, so there was no conviction.  Instead, sentencing was delayed for a year to give the client a chance to attend the PDP, submit to the HIV test and return to the court in a year to have his plea withdrawn and the case dismissed.

The client then indeed attended the PDP and submitted to the HIV test.  He then stayed out of trouble for a year.

Greg then returned to the court at the one-year mark and showed the judge the certificate of completion of the PDP and the HIV test results.  The judge then allowed our client to withdraw his plea and upon the prosecutor’s motion to dismiss under Penal Code § 1385 (in the interest of justice), the case was dismissed under Penal Code § 1001.96.

The client was very happy with this result.