What Is Loitering to Commit Prostitution, Penal Code 653.22?

However, it can also be charged to a female who is dressed as may a prostitute and appears to be “hanging out” in a public place where she seems to be making herself available as a prostitute.  She may even speak with several drivers who pull to the roadside to speak to her.

Brief Synopsis: Loitering to commit prostitution (Penal Code § 653.22) is commonly charged against someone who drives back and forth in an area with prostitutes nearby, apparently lingering or delaying his movement through the area and sometimes, stopping to talk with a prostitute or prostitutes, although this is not required.  It is a misdemeanor.  Entrapment can be a defense.

Our office has seen this charged when a male client was walking around a West Hollywood gas station for perhaps twenty minutes near to a side street where prostitutes were standing and waving at drivers passing by.  The gas station owner called the police on our client.  Our client was dressed in drag, so while he was a male, he appeared to be a female.

In another case, our client was driving slowly up and down a Hollywood street where prostitutes were standing.  Police observed him, as they were also observing the johns speaking with the prostitutes from their cars.  After he did this for about fifteen minutes, police stopped him on an alleged violation of Penal Code § 653.22, loitering with the intent to commit prostitution. 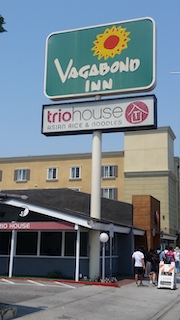 Vagabond Inn
Section 653.22 requires that the prosecution prove someone was indeed loitering in a public place with the specific intent to commit prostitution.  The police will commonly state in the police report that the officer observed a suspect walk back and forth or stand in a public area for ten or fifteen minutes’ minimum, usually during a time when prostitution commonly takes place (usually at night).

The officer will also state that he or she observed the suspect waiving to motorists passing by or somehow otherwise, by gestures, trying to get the attention of another person to engage in an exchange of money for sex.  This may be walking up to cars at a stop light and trying to engage in conversation with males, if the suspect is a female.

The suspect’s lingering or delaying by our client will have no explanation, such as one was waiting for a friend to pick them up.

A public place is not limited to a street.  It can be an alley, a park, a parking lot, or even a parked car or van in a location commonly used by prostitutes.  It can also include a bar, a strip club or a restaurant, but this is not commonly where such charges are based.

The specific intent to commit prostitution is usually proven by an admission from our client that he or she was looking for a prostitute, but the client will insist he did nothing wrong because he never discussed an exchange of sex for money.  When the client does not admit this, it is tough for the prosecution to reach a conviction.

Instead, the client may explain to police that she was simply trying to have someone buy alcohol for her, or “bum” a cigarette, or ask directions, or get a ride home.

However, if the client’s purse or wallet is found to contain condoms or lubricant, the lack of a confession may not be so determinative.  Likewise, if the client’s cell phone is searched (often illegally) and there are text messages indicating an intent to “earn some money tonight via the oldest profession in the world” or “find a hot woman for a little R & R,” these may show specific intent.

What the client is usually unaware of is that merely loitering in the area is a crime.  It is punishable by up to six months in county jail or a fine of up to $1,000, or both.

Entrapment is a defense to this charge, as is coercion from a nearby pimp, but these facts are often difficult, or in the case of coercion, dangerous to prove.  Entrapment requires that an otherwise law-abiding person is met by an overbearing or forceful police officer who intimidates the client into committing a crime that the client had no intent to commit.  This can be by a police officer offering a woman, who is not a prostitute, an exorbitant sum of money to have sex with him and the woman, with financial need for the money, agrees after initially refusing to have sex for money.