Our client, age 38, was driving home from work at about 6:00 p.m. on southbound Figueroa, approaching 81st Street.  To his right, on the west side of the street, was a woman standing on the sidewalk, dressed in a red leather skirt that was less than half the length of her thigh.  She was wearing black boots with a high heel and a tight, black top that accentuated her thin figure.
Our client was happy to see the light in front of him turn red, so he could get a longer look of this woman.
The woman knew he was staring at her, and being a police officer serving as a decoy to arrest johns seeking prostitutes, she walked toward our client’s car in the lane closest to the curb.
He rolled down his passenger-side window and she bent over to rest her forearms on the edge of the window and look directly at him.
She asked him, “Are you interested in a little fun?”  His response was a stuttering, “You are so beautiful.”  The police officer, who our client did not know was a police officer, asked again, “So are you interested in a little fun with me?”
At that moment, the traffic light in front of him turned green and our client apologized, saying “I gotta’ go.  The light is green.  Sorry.” 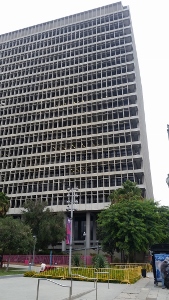 Clara Shortridge Foltz CCB Courthouse
The entire interaction was observed by another police officer unit nearby.  As our client moved forward, homeward bound, a police SUV pulled behind him within seconds with lights flashing.
Our client pulled over and turned right onto the nearest side-street off Figueroa, knowing he did not agree to anything with the person he believed was a prostitute, so he wondered if his registration was expired or a tail light was burned out.
The officer asked our client if he knew why he was being pulled over and our client answered “No.”  The officer explained that it was illegal to solicit a prostitute and cited the Penal Code section to our client.
Our client was mad at this accusation and told the officer, “I just told her she was beautiful!  That is all.”  The officer then had our client exit his car as another officer searched our client’s car.  Our client was instructed to sit on a nearby curb and, after giving the police officer his driver’s license, was issued a ticket for violating Penal Code § 647(b), “Solicitation of Prostitution.”  He was asked to sign at a place on the bottom of the ticket promising to appear in court at 210 West Temple, Los Angeles.
The officer then announced, “that it all.  You can leave now.”
The client got back in his car and left, calling Greg Hill from his cell phone while he continued driving home.  It was about 6:30 p.m.  Greg answered and the client explained what had just happened while his memory was fresh.
Greg commented that it did not sound like there was any agreement reached about having sex in exchange for money or anything of value, so our client certainly could not have violated Penal Code § 647(b).
The client explained that he had a prior conviction for domestic violence from 2006 in the Compton Superior Court.  He was very concerned that he would lose his job if convicted of solicitation of a prostitute, so he retained Greg Hill & Associates to defend him from this improper charge.
Greg wrote letters to the Los Angeles City Attorney and the Los Angeles Police Department, explaining that the ticket was improperly issued and that the audio tape of the brief conversation ought to be reviewed prior to any charges being filed in court.  Greg explained that there never was even a discussion of sex, although the decoy asked “Are you interested in a little fun with me,” but that before our client could agree to “a little fun,” the traffic light facing him turned green and he had to move forward, never agreeing to anything and certainly never discussing the exchange of money or anything of value for “a little fun,” if that can be assumed to mean sex.
There was no response to either letter mailed out.  When the arraignment date arrived, Greg went to the courthouse at 210 West Temple in Downtown Los Angeles.  This is known as the Clara Shortridge Foltz courthouse or CCB (Central Criminal Building).
No case was filed against our client, as our client had hoped.  Greg advised the client of this, which made him very happy.
It must be stated that we have no way of knowing if our letters prevented a filing or even had any effect.  The police often issue tickets, we believe, knowing that no crime actually took place, but in the case of loitering for purposes of prostitution and solicitation of prostitution, just to keep motorists from talking to prostitutes in certain areas.  This, in all fairness, may have been what took place with our client.
For more information about prostitution and the issues in this summary, please click on the following articles:
Contact us.
Serving Torrance, Long Beach, Compton, Airport Courthouses and Other Courthouses.