When Proposition 64 passed, newspapers and commentators on the radio predicted that attorneys would be flooded with requests by those with prior convictions eligible for reduction to have such convictions reclassified from a felony to a misdemeanor, from a misdemeanor to an infraction or simply dismissed.
After all, such convictions could have lasting effects on one’s employment, ability to secure a loan or rent a home, ability to gain a professional license (i.e. real estate broker, receiving a teaching credential, CPA, medical doctor, dentist, lawyer, physical therapist, registered nurse, etc.) or be admitted to any one of many school, especially graduate schools.  The person, if she or he owns a restaurant, may be denied a license to serve alcohol at the restaurant.
Having a felony record may also prohibit one from owning or purchasing a firearm.  The list of consequences of having a felony record includes numerous negative consequences, including the right to vote (at least while in custody and on parole, but one must actively request the reinstatement of such rights), the right to serve on a jury, or the ability to join the military.
What we find is the biggest negative consequences of a felony conviction is being subject to deportation or removal proceedings.
Our office heard and read such predictions with skepticism, knowing that one of the effects, particularly so with adolescents who begin smoking marijuana – the user’s school grades plummet and the person loses interest in school.  The user becomes generally apathetic about his or her future and has less passion for “life” in general.  The person may also gain and relegate work or school to a low priority. 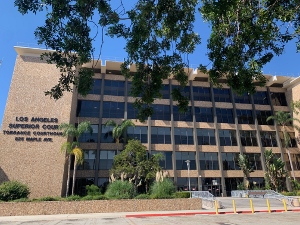 Torrance Superior Courthouse
We believed we would have some clients request reduction or dismissal of charges, but these would be few and far between, or it would be requests from parents or spouses who were not marijuana users.
Our prediction of how Prop 64 would be received was accurate.  In fact, two years after Proposition 64 passed, newspapers reported surprise that only ten percent of those eligible for Proposition 64 relief sought such relief.  This seemed to confirm our observation that those with scarring convictions would not seek relief due, ironically, to the effects of marijuana itself.
The surprise noted by newspapers explained that many with such marijuana-related convictions just did not seem interested in helping themselves.
Nonetheless, we have had some clients call us about requesting reduction of a marijuana-related conviction(s), but in much lower numbers that legislators predicted when such legislation was passed.  Sometimes, the person contacting us is the mother or father of someone with such a conviction, or the spouse of someone with such an eligible conviction.  We also have asked for reduction on active cases, as the first summary below describes.
When we do seek reduction of such an eligible conviction, we must be rigorous in our request to the judge, insofar as we must explain, if applicable, that our client is not disqualified from such relief due to:
For a description of the cases in which we have requested relief under Prop 64, please click on any of the following links below.
Contact us.