Summary in 50 Words or Less: If a judge agrees to recall and resentence an inmate, Proposition 57’s prohibition on direct filing of juvenile cases does not apply, so if the inmate was a juvenile at the time of the crime, the case is not then refiled in juvenile court, as the following summary exemplifies.  Instead, the sentence is amended, but the case is not refiled to the arraignment stage.

In 2008, Adrian Gilbert Federico entered a plea agreement in the Riverside Superior Court for a crime he allegedly committed when age 15.  The case had been directly filed in Superior Court because of its serious nature.
Federico pled guilty to assault with a firearm (Penal Code § 245(a)(2)) and admitted that he personally used a firearm in the commission of the offense (Penal Code § 12022.5(a) and § 1192.7(c)(8)), that he personally inflicted great bodily injury (Penal Code § 12022.7(a) and § 1192.7(c)(8)) and committed the offense for the benefit of a criminal street gang (Penal Code § 186.22(b)(1)(C)).
The trial court judge, John M. Monterosso, sentenced Federico to state prison for a total of 20 years, consisting of three years on the 245(a)(2), plus the midterm of four years on the personal use of a firearm enhancement, three years for the great bodily injury enhancement and ten years on the gang enhancement.
Ten years later, in 2018, the judge received a letter from the California Department of Corrections and Rehabilitation (CDCR), recommending that the judge recall the sentence of Federico and resentence him under Penal Code § 1170(d) because the judge should not have imposed both the great bodily injury enhancement of three years and the ten year gang enhancement in light of People v. Gonzalez (2009) 178 Cal.App.4th 1325 since both enhancements were based on infliction of great bodily injury on the victim, a violation of Penal Code § 1170(g).
Defendant was cc’d on the letter and filed a motion agreeing with the CDCR’s recommendation, which would reduce his sentence by three years and also requesting that the judge vacate the conviction and apply Proposition 57 (passed into law on November 8, 2016) to transfer the case back to start in juvenile court due to the direct filing mandates of Prop 57, since Federico was fifteen when the crime took place. 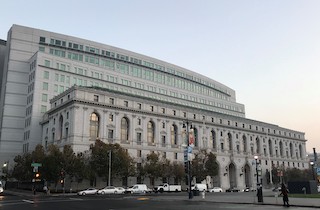 Court of Appeal First Appellate District San Francisco
Federico also asked that SB 1391 apply in his case, which repealed the authority of a prosecutor to transfer a case from juvenile court to adult court if the juvenile was 14 or 15 when the crime took place.  Such a request would only be applicable to him if the conviction were vacated and the matter refiled in juvenile court under Prop 57.
Judge Monterosso agreed to apply Gonzalez, reducing Federico’s 2008 sentence to seventeen years.  The judge changed the sentence to be four years on the 245(a)(2) count (from three years), plus three years on the great bodily injury enhancement (unchanged from before), plus ten years for the use of a firearm enhancement (an increase from four years in the earlier sentence).  The judge then stayed the ten-year gang enhancement under Penal Code § 654.
However, the judge declined to apply Prop 57, finding that it did not apply retroactively to a final judgement.
Federico then appealed the order resentencing him to the Fourth Appellate District, which affirmed Judge Monterosso.  Federico argued that the recall of his sentence removed the final judgment status of his case, which therefore allowed application of Prop 57 to vacate his sentence and have it refiled in juvenile court.  In other words, the whole case could be revised, not just the enhancement under Gonzalez.
The Fourth Appellate District disagreed, finding that Penal Code § 1170(d) was extremely limited in scope and only allowed the court to cure what may have been an unauthorized sentence.  It did not allow the trial court judge to undo everything and start all over again.
Moreover, in People v. Superior Court (Lara) (2018) 4 Cal.5th 299, 304, the California Supreme Court applied principles of In re Estrada (1965) 63 Cal.2d 740 and held that Prop 57 applies retroactively to all juveniles charged directly in adult court whose judgements were not final when Prop 57 was enacted.
The Fourth Appellate District then explained that Federico’s judgement was final sixty days after he entered his plea on April 18, 2008 because he did not appeal from the judgment.  As a result, Prop 57 did not apply to Federico.
Lastly, Penal Code § 1170(d) only applies to resentencing under the provisions of a new law, not reopening the whole case to apply a myriad of new laws.
We present this summary because Federico’s argument that 1170(d) resentencing on one area of a new sentencing law opens up the whole case is a seductive (and very appealing), but incorrect, argument, as the Fourth Appellate District explained.
The citation for the Fourth Appellate District Court ruling discussed above is People v. Adrian Gilbert Federico (4th App. Dist., 2020) 50 Cal. App. 5th 318, 264 Cal. Rptr. 3d 61.
For more information about the provisions of Prop 57 that affect juvenile filings, please click on the following articles:
Contact us.
Serving Torrance, Long Beach, Compton, Airport Courthouses and Other Courthouses.