Home
Other Information
Criminal Defense Articles
Prop 47 – Who Has the Burden of Proof on Resentencing?

Prop 47 – Who Has the Burden of Proof on Resentencing?

Proposition 47 (“Prop 47”), which allows for requesting resentencing at California Penal Code § 1170.18, does not specifically allocate a burden of proof.  It does note state for example, that the prosecution must prove a petitioner for resentencing is ineligible.  Likewise, it does not clearly state that a petitioner must show that, for example in shoplifting, that the loss at issue was less than $950.

The Point of This Article:  The burden of showing a person and a conviction is eligible for resentencing under Prop 47 is still being worked out by our courts, except insofar as the amount in controversy in shoplifting cases.  If someone was convicted of felony shoplifting before Prop 47 was passed, the person seeking reduction to a misdemeanor must show that the value of the items taken was less than $950.

However, as to an old conviction prior to the passage of Prop 47, such a presumption does not apply and petitioner must show that the value of the items were less than $950. 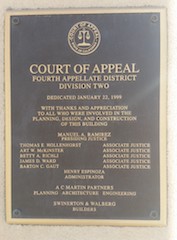 4th Appellate District Division 2 Riverside
This point was exemplified in the case of Timothy Wayne Sharow.  Mr. Sharow was originally convicted of nine counts of felony commercial burglary (Penal Code § 459), arising out of events in 2007 at a Ross Department store and an AJ Wright store in Riverside County.  The case was more complicated than the typical shoplifting case because Mr. Sharow had eight prison priors and one strike prior.  He was consequently sentenced to nineteen years and four months in state prison.
Mr. Sharow appealed on various grounds and had four of the nine counts reversed.
On the remaining five counts, he filed a petition for resentencing under Prop 47 to have each felony count reduced to a misdemeanor.  The petition contained no factual discussion of the underlying charges.
The prosecutor opposed the resentencing petition, arguing that Sharow was not qualified because each loss exceeded $950 and in fact exceeded $100,000.

The trial court judge in Riverside County denied the petition to all five counts.

Sharow appealed the decision to the Fourth Appellate District as to just counts 1 and 2.  He argued that the record did not show the loss in each count exceeded $950.  In opposition, the People contended that Sharow bore the burden of showing, under Penal Code § 1170.18, that the losses were less than $950.

The appellate court explained that a “blanket request” for resentencing “without any effort to discuss any facts surrounding the offenses was fatally defective.”  In other words, the appellate court agreed that the petitioner bore the burden of establishing eligibility for reduction to a misdemeanor by showing the value of the loss was less than $950.

The appellate court came to the conclusion that the petitioner had the burden of proof after considering the published work on Prop 47 by Judge J. Richard Couzens and Presiding Justice A. Bigelow.  Their work plainly states, “[t]he petitioner will have the initial burden of establishing eligibility for resentencing under section 1170.18(a)…If the crime under consideration is a theft offense under sections 459.5, 473, 476, 490.2 or 496, the petitioner will have the burden of proving the value of the property did not exceed $950 “ Couzens Bigelow, Proposition 47, “The Safe Neighborhoods and Schools Act,” p. 40.

The appellate court also noted Vance v. Bizek (2014) 228 Cal. App. 4th 1155, 1163, fn. 3 and Evidence Code § 500, which state, “A party has the burden of proof as to each fact the existence or nonexistence of which is essential to the claim for relief or defense he is asserting.”
In conclusion, the appellate court further noted that placing the burden of proof on Sharow would not be unfair or unreasonable.  He knew the nature of the items he took in counts one and two, but omitted any discussion of these counts.  The appellate court thus affirmed without prejudice to Sharow filing his petition again.
The citation for the Fourth Appellate District Court ruling discussed above is People v. Timothy Wayne Sherow (4th App. Dist., 2015) 239 Cal.App.4th 875.
For more information about Prop 47, click on the following articles:
Contact us.
Serving Torrance, Long Beach, Compton, Airport Courthouses and Other Courthouses.