“Defendant is subject to a warrantless search condition, as to defendant’s person, property, premises and vehicle, anytime of the day or night, with or without probable cause, by any peace, parole or probation officer.”

Such terms are regularly stated in Los Angeles, Orange, Riverside, San Bernardino and Ventura County.  They are generally understood to be a waiver of defendant’s Fourth Amendment rights.  However, clients often ask rhetorically, “Well, does this mean police can just pull me over in my car or barge into my house just because they feel like it and search my car or house or me?”

Without All the Details, What Happened?:   Standard probation conditions authorizing police to conduct warrantless searches, upheld on appeal when police find felon on probation with shotgun.

The question is difficult to answer because, practically speaking, we all intuitively trust that police must still have some minimum respect for one’s personal expectation of privacy or that there is some threshold of suspicion before a police officer conducts a search.  After all, otherwise officers would be free to conduct racial profiling, random searches at will and our country would resemble a third-world country for probationers and parolees. 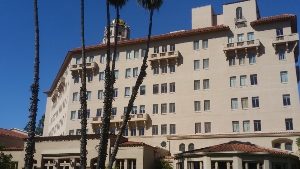 U.S. Ninth Circuit Court of Appeals Pasadena
In United States v. Marcel Daron King (2013 DJDAR 3006), the United States Court of Appeal for the Ninth Circuit addressed this rhetorical question due to the facts of the case.
Mr. King was on probation out of the City and County of San Francisco.  A term of his probation read exactly according to the quoted section above.  After King had been on probation for some time, officers of the San Francisco police department identified Mr. King as a suspect in a homicide.  When they investigated his criminal history, they discovered that he was on felony probation.  The officers then went to King’s home and found an unloaded shotgun under his bed.  He was immediately arrested

Federal prosecutors then charged King with being a felon in possession of a firearm, in violation of 18 U.S.C. § 922(g).  Once in court, King filed a motion to suppress the introduction of evidence of the shotgun, arguing that it was the fruit on an illegal search.  King acknowledged that although he was on probation, he argued that officers could not search his home without reasonable suspicion.

The Ninth Circuit distilled down the issue to:

“Whether the probation condition so dismissed, or completely eliminated [Smith’s] reasonable expectation of privacy that a search by a law enforcement officer without any individualized suspicion would have satisfied the reasonableness requirement of the Fourth Amendment.”

Turning to the relevant case law that has considered similar facts and the same issue, the Ninth Circuit noted that courts had to decide the issue by balancing the defendant’s privacy interests against the government interests.  The court then stated that it must consider the totality of the circumstances to decide if the search was unconstitutional.

In King’s case, the Ninth Circuit noted that King’s status as a probationer necessarily came with a lower expectation of privacy than a citizen who is not on probation.  The Ninth Circuit cited to United States v. Knights, a 2001 opinion from the U.S. Supreme Court, that all probationers have a “significantly diminished” expectation of privacy.  Turning then to the search of King’s bedroom, the court found the intrusion “slight.”

In balancing the government’s interest in conducting such a search, the court found the interest high.  It did have an interest in apprehending violators of the law to protect potential victims.  The court further noted that the U.S. Supreme Court appreciated that “[t]he recidivism rate of probationers is significantly higher than the general crime rate.”  Griffin v. Wisconsin (1987) 483 U.S. 868, 880.  In addition, the government’s search was justified because it led to the discovery of evidence and prevented the destruction of evidence.

The court therefore concluded that the government’s interest in the search out weighed King’s personal expectation of privacy, so there was no Fourth Amendment violation.

We see this case as quite significant because it seems to erase a probationer’s right to any privacy if police identify a probationer as a suspect in any relatively serious crime.

Consequently, in response to the rhetorical question posed so often in the past and described above, after this decision, our answer is “yes.”
The citation for the Ninth Circuit Court of Appeals ruling discussed above is United States v. Marcel Daron King (9th Cir., 2013) 711 F.3d 986.
For more information about probation and search and seizure issues, click on the following articles:
Contact Greg Hill & Associates