Home
Other Information
Criminal Defense Articles
Petition for Factual Innocence – Must One Wait to File?

Petition for Factual Innocence – Must One Wait to File?

On November 1, 2016 in San Francisco, Dr. Edmond Bedrossian was arrested after a reported domestic violence arrest, after which he was booked on suspicion of felony false imprisonment (Penal Code § 236) and misdemeanor battery (Penal Code § 243(e)(1)).
Shortly thereafter, the District Attorney’s office decided not to file charges and Dr. Bedrossian successfully moved to have his arrest deemed a detention under Penal Code § 849.5.

Brief Synopsis: According to the First Appellate District, one must wait until the statute of limitations expires to file a Petition for Factual Innocense (PFI) under Penal Code § 851.8 to have the arrest record sealed and the court file destroyed three years later.  We feel this is a bad ruling, especially in terms of felonies, because for a felony the statute of limitation is usually three years and the limit by code to file a PFI is two years.

On November 10, 2016, Dr. Bedrossian filed a petition for factual innocence under Penal Code § 851.8 to not only be found factually innocent of felony false imprisonment and misdemeanor battery, but to have the arrest record sealed and thereafter destroyed three years later.
In support of his petition, he submitted a declaration stating that he “is a highly regarded oral surgeon who frequently travels internationally to perform surgeries on behalf of charities.  He also consults and testifies as an expert witness in his field . . . He is concerned that his arrest record will subject him to additional scrutiny and potential problems with foreign and domestic customs.  As public records background checks are commonplace by attorneys, he will likely not be retained by counsel fearing that he may be impeached or embarrassed by the introduction of facts regarding his arrest.” 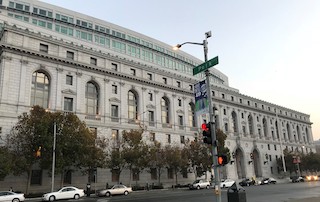 Court of Appeal First Appellate District San Francisco
The trial court judge in San Francisco denied the petition, stating that the petition was not ripe, as it may not be presented until the statute of limitations has run on the potential charges, which means three years for the felony false imprisonment charge.
Dr. Bedrossian appealed this ruling to the First Appellate District, arguing that the waiting period imposed by the trial court violated his right to due process and equal protection.
The First Appellate District acknowledged the doctor’s interest in protecting his reputation as a law-abiding citizen, but commented that the doctor’s concerns about losing work were largely speculative.  The court also stated that the doctor’s interest must be balanced with the State’s interest in investigating and prosecuting suspected crimes.
It continued, stating that “the district attorney’s decision not to pursue a case does not mean that the district attorney will not reconsider the decision if additional evidence is uncovered or additional witnesses come forward in the future.  This happens with some regularity.”
In deciding whether a restriction violates due process, the court must consider the following factors under People v. Ramirez (1979) 25 Cal.3d 260, 269: “1) the private interest that will be affected by the official action; 2) the risk of an erroneous deprivation of such interest through the procedures used, and the probable value, if any, of additional or substitute procedural safeguards; 3) the dignitary interest in informing the individuals of the nature, grounds and consequences of the action and in enabling them to present their side of the story before a reasonable governmental official; and 4) the governmental interest, including the function involved and the fiscal and administrative burdens that the additional or substitute procedural requirement would entail.”
In considering each of these factors and their relative weights, the First Appellate Court found the governmental interest in being able to file the case prevailed.  The court noted that its analysis was proper in a general context and not as to the specific facts of his case.  Matthews v. Eldridge (1976) 424 U.S. 319, 344.
Bedrossian also had an equal protection argument, stating that the lower court’s ruling allowed people facing a misdemeanor to file an 851.8 petition earlier than those facing a felony because the statute of limitations on a misdemeanor is just one year and on a felony, it is generally three years.  Therefore, the doctor argued, the classifications are arbitrary and the difference in treatment is irrational.
The First Appellate Court dispatched with this argument quickly, noting that the greater public safety concerns with prosecution of felonies made the classification reasonable and not arbitrary or irrational.
Our office notes this ruling with a great deal of interest because Penal Code § 851.8(l) states that a petition for factual innocence (then to seal and destroy) must be brought within two years of the arrest or the filing, whichever is later, or at any later date “for good cause shown.”  This ruling in Bedrossian’s case should be repeatedly cited for “good cause” when the arrest was for a felony and one must wait three years to file.
The citation for the First Appellate District Court ruling discussed above is In re Edmond Bedrossian (1st App. Dist., 2018) 20 Cal.App.5th 1070.
For more information about petition for factual innocence issues, please click on the following articles:
Contact us.
Serving Torrance, Long Beach, Compton, Airport Courthouses and Other Courthouses.