Our client, then age 57, was returning home to Rancho Palos Verdes from a Friday evening out at Tony’s on the Pier in Redondo Beach.  She was driving along Palos Verdes Drive West, past the Palos Verdes Estates police station.
It was about 1:30 a.m. on a Saturday morning.  Her driving apparently caught the attention of a Palos Verdes Estates police officer, who was sitting in his patrol car watching traffic pass along in front of the police station.
The officer decided to follow our client as she went southbound on Palos Verdes Drive West.  The officer claimed that our client was weaving over the double-yellow line that separates north and south traffic and then that our client veered into the parking lane along the right side of the road several times.  He activated his overhead blue and red flashing lights and made a traffic stop of our client near the intersection of Via Montemar and Palos Verdes Drive West.
After some field sobriety tests on a sloped surface (that the officer claimed our client failed), he asked her to submit to a preliminary alcohol screening (PAS) test and she refused, which is legal under Vehicle Code § 23612(i).  She was then promptly arrested and transported to the Palos Verdes Estates Police Station.  Once there, she was asked to submit to a breath test there and she did so, blowing a 0.17% blood alcohol content (BAC) sample. 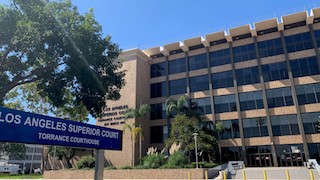 Torrance Courthouse
She was released later that morning and called Greg Hill & Associates the following week.  She met with Greg Hill and explained the facts of the case.  Greg explained what he thought the issues in the case were that would be important and how the case would resolve.
The case resolved better than expected, with the client winning at her DMV hearing to avoid an administrative suspension of her driver’s license and in court, the case resolved for a DUI, but with our client only having to attend a three-month (AB541) program, not a nine-month program as would be normally called for with her BAC being above 0.15%.
While the client was pleased with how the case resolved at the DMV and in court, having a conviction and being on probation was problematic in her job as a dietician.  She worked for a large company that was bought out by another company about one year after her plea and just one year into three years of informal, or summary probation.
So, at the half-way mark in her probation, she responded to Greg’s follow up e-mail asking her if she was interested in early termination of probation and expungement.  She client explained that she was interested in this because her salary had been decreased and her hours cut back due to her original employer being bought out.  She was not fired yet, but she felt like it was inevitable for budgetary reasons.  She also wanted to apply to other companies, but felt that her being on probation while applying would  be problematic.
The client was also interested in having her conviction expunged.  She asked about this to Greg and Greg explained how expungement (relief under Penal Code § 1203.4) actually does not erase or delete the case filing from one’s record, but it does permit the defendant to legally state in response to an employment application (with certain exceptions) that he or she has never been convicted of the crime for which that person actually was indeed convicted.  The record of our client would still show she was charged with DUI, but it would later state that the case was dismissed once it was expunged.  The client understood these limitations and said she was interested in such relief.
Greg Hill & Associates then prepared a motion for modification of probation so as to end it early and filed this at the Torrance Superior Court.  Greg also served the District Attorney who originally prosecuted the DUI case.
The judge hearing the motion granted early termination of probation, which greatly relieved the client.  Greg Hill & Associates then filed the FL-180 form (Petition for Dismissal) with a supplemental points and authorities, as well as a declaration from our client explaining why she was requesting expungement.  Greg paid the $120 filing fee at the court and filed the FL-180 with the attachments.
The same judge who ruled on her motion for early termination of probation then granted her petition for dismissal.  The client was very happy, as she now believed she could seek other employment without the shadow of her probation or her conviction looming over her.
For more information about expungement, please click on the following articles:
Contact us.