Opening Garage Door with Stolen Remote Is Not Burglary

Our office has received several calls over the years about a romantic relationship that ended, but one party retains possession of a remote control garage door opener to the garage of the other person.  The caller asks us what we can do or they should do to prevent the other party from burglarizing their home, where they are no longer welcome.

The following case addresses this issue, although with slightly different facts.

On the evening of July 24, 2010, in Sacramento County, Timothy Loop was at home when he heard the garage door of his home opening.  He had not authorized anyone to enter his garage and so hearing the door opening was quite a surprise. 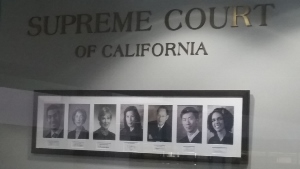 Loop got out of bed and ran to his garage, where he saw Christopher Magness standing at the end of his driveway.  Magness dropped the remote control and ran away.  Loop chased Magness on a bike and saw him enter a house. Police were then called and Magness was arrested.

Evidence was later discovered that Magness had taken the remote control from Loop’s car parked in the driveway.

At the preliminary hearing, the prosecutor argued that there was a completed home burglary and the judge agreed, reasoning, that opening the garage door was an entry into the home.

Defendant then filed a motion to reduce the charge to attempted burglary.  The motion was denied by the trial court and so Magness filed a writ of prohibition in the Court of Appeal.  The Court of Appeal then granted Magness’ writ.

The prosecution next appealed to the California Supreme Court.  In the published opinion of Christopher Magness v. The Superior Court of Sacramento County (2012 DJDAR 7503), the Supreme Court agreed that the mere act of opening the garage door was only attempted burglary, not a completed entry into the home.

The Supreme Court first discussed a series of published opinions that had similar facts and where the central issue was whether attempted burglary or burglary took place (Penal Code § 459).

The Supreme Court in Magness found it crucial that while defendant may have committed a “breaking” in the context of entering by opening the garage door, “he did not ever enter the residence.”  No part of his body or tools penetrated the outer boundary of the residence.  Moreover, there was no allegation, for example, that defendant reached under the bottom of the garage door with his hand or with a tool.  There was no physical entry into the structure.  In short, the court held, “something that is outside must go inside for an entry to occur.”

Accordingly, the Supreme Court affirmed the judgment of the Court of Appeal.
The permanent citation for the California Supreme Court ruling at issue in this article Christopher Magness v. The Superior Court of Sacramento County (2012) 54 Cal.4th 270, 278 P.3d 259, 142 Cal.Rptr. 3d 268.